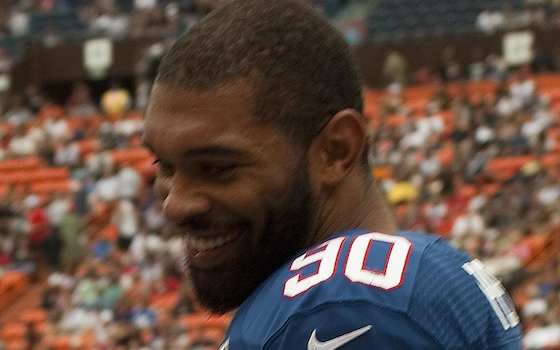 The Green Bay Packers have signed eight-time Pro Bowl defensive end Julius Peppers to a three-year deal worth up to $30 million.

According to Peppers' agent, Carl Carey, the deal includes $7.5 million in guaranteed money and will pay Peppers $8.5 million in salary for the first year.

In Green Bay, Peppers will be reunited with one of his former coaches, Mike Trgovac, who is the Packers' defensive line coach.

Trgovac coached Peppers from 2002-08 with the Carolina Panthers. He was Peppers' position coach in 2002 and was Carolina's defensive coordinator from 2003-08.

The deal came days after Peppers was released Tuesday by the Chicago Bears due to salary cap issues.

With Peppers set to receive a base salary of $13.9 million in 2014 and count $18.183 million against Chicago's salary cap, the Bears deemed him too expensive to keep on the roster.

Peppers, 34, played the past four seasons with the Bears after being selected by the Panthers in the first round of the 2002 draft. He signed a blockbuster six-year deal worth $84 million in 2010, and restructured his contract on two occasions to give the Bears more cap room.

Peppers led the Bears last season with 7.5 sacks -- the fewest he's had in a Chicago uniform. Peppers has 118.5 career sacks, which ranks second in the league since his entry (2002).

In four years playing for the Bears, Peppers started in every game (64), and racked up 37.5 sacks in addition to making the Pro Bowl in every season with the team except for 2013. Peppers earned $53.5 million throughout his tenure with the Bears.