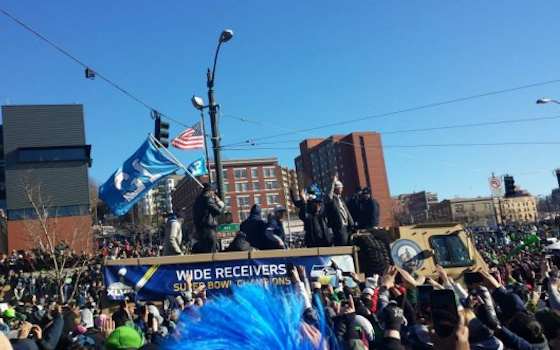 A whiff of marijuana lingered along 4th Avenue near Columbia Street. Fans crammed onto the steps of Seattle City Hall and upon rooftops. Firetruck sirens blared, and some of the estimated 700,000 spectators who descended into downtown Seattle Wednesday heard vuvuzelas typical of a soccer World Cup.

On an icy -- 21 degrees with windchill down to 10 -- day, some of the Twelves insulated themselves in the traditional way: Booze.

"I've been waiting for this since the day I was born," said Matt Johnson, 29, sporting a blue 12th Man cape and a champagne bottle in a brown paper bag. "I'm going to pop some celebratory bubbly as they pass by as a tribute to our boys."

Johnson, an industrial engineer at Boeing, grew up in Seattle. He never rooted for a team that won a championship, a trait shared by many Seattle fans still overjoyed three days after the Seahawks crushed the Denver Broncos, 43-8, in Super Bowl XLVIII.

Evan Somerhiser, a 24-year-old gas station attendant from Bremerton, took the 6:20 a.m. ferry with his family so he could set up a quilt on the sidewalk across from City Hall. There he would wait for six hours so he could see the Seahawks pass down Fourth Avenue on the "Ride the Ducks" vehicles and open transport vehicles.

Some fans camped overnight on cold concrete so they could stake out a spot along the two-mile, southbound parade route, which started at Seattle Center and ended at CenturyLink Field. The crowd along appeared 15 deep on either side. Many queued up on higher slopes of the east-west streets for a parade that started more than an hour late.

"You may never see this again," Somerhiser said. "This may be the only time we ever get to see this. Generations missed out on ever getting to see a championship parade."

"It means everything, for everybody. Businesses get to make money. Kids get to ditch out on school to come here," Somerhiser said. "People got off work to come and enjoy it. It's just a great thing for everybody."

According to a Seattle Public Schools statement, about 13,000 students and 565 teachers were absent Wednesday, though some -- including Somerhiser's cousin, who skipped class at Bremerton's Pinecrest Elementary -- weren't sure if they'd be excused, so they "called in sick."

Ken Nilson, a firefighter from Silverdale, was given the day off. He said there was no chance he was going to miss out on the biggest celebration in Seattle sports history. When the Sonics won the NBA Championship in 1979, 300,000 people crowded into downtown to celebrate. The city hadn't enjoyed a major sports championship since.

"It's just something you don't miss," said Nilson, his toddler wrapping both legs around his shoulders to get a better view. "It happens every 35 years. I'm gonna be 80 if it happens again."

The parade turned into the north lot of the Clink, where inside the stadium the players, coaches, executives and staffers climbed down from their rigs and were hailed by another 45,000 season ticket-holders and their families.

Introduced by numbers, the final player was No. 3, Russell Wilson, who walked onto the field pumping the Lombardi Trophy into the air.

"Our plan is to win another one for you next year," Wilson said.

Coach Pete Carroll led the crowd in a "Sea-hawks! Sea-hawks!" chant and said the team will be back. "We're just getting warmed up," he said, "if you know what I'm talking about."

More than 700,000 fans lined the streets of downtown Seattle for the Seahawks NFL championship victory parade on Wednesday, February 5. The record-breaking crowd celebrated the first Super Bowl victory in the history of the franchise. Seattle Channel captured the exuberant mood and the city`s warm welcome home to the Seahawks as they paraded down Fourth Avenue near City Hall.