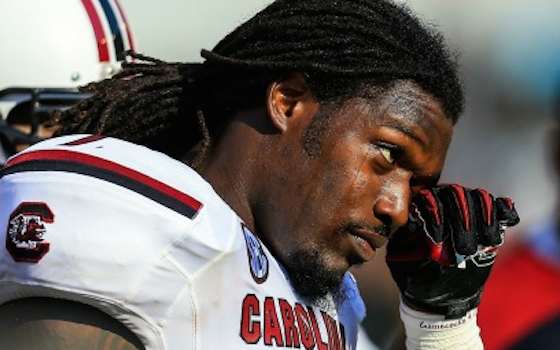 Houston selected DE Jadeveon Clowney with the No. 1 overall pick of the 2014 NFL Draft, marking the first time a defensive lineman has been chosen first overall since 2006 (Mario Williams, Houston).

Clowney is the 14th defensive lineman in NFL history to be selected with the No. 1 overall pick and only the second player from South Carolina to be chosen No. 1 overall (George Rogers, 1981).

Clemson is the fifth school in draft history to have a wide receiver selected in the first round in consecutive years. In 2013, WR De Andre Hopkins was selected 27th overall by Houston.

The schools to have wide receivers selected in Round 1 in consecutive years:

With his selection by the Atlanta Falcons with the No. 6 overall pick in the NFL 2014 Draft, Texas A&M tackle Jake Matthews joins an exclusive NFL club.

Matthews becomes the 10th son of a Pro Football Hall of Fame player/coach to be drafted into the league. Jake follows his father Bruce (HOF, 2007). Bruce Matthews, a guard, was drafted out of Southern California by the Houston Oilers in the first round (No. 9 overall) in 1982.

Jake Matthews is the fourth son of a Hall of Famer to be drafted in the first round, joining Chris and Kyle Long snd Kellen Winslow.

Quick Hits: Other items of note from the Draft

QB Blake Bortles (Jacksonville, No. 3) was selected earlier than any other player in Central Florida history. He joins QB Daunte Culpepper (1999, No. 11 overall, Minnesota) as the only players in school history to be chosen in Round 1.

LB Khalil Mack (Oakland, No. 5) is the first player from the University of Buffalo to be drafted in Round 1.

Three Louisville players were selected in Round 1 of an NFL Draft for the first time in history -- S Calvin Pryor (No. 18, Jets), QB Teddy Bridgewater (No. 32, Minnesota) and LB Marcus Smith (No. 26, Philadelphia).

Nine defensive backs were selected in Round 1 of the 2014 NFL Draft, the most of any first round in NFL Draft history. The previous record of seven occurred three times (1998, 2006 and 2013).

The record-setting nine defensive backs drafted in Round 1:

The Southeastern Conference had 11 players drafted in Round 1 of the 2014 NFL Draft, the most of any conference.

Since 2000, the SEC leads all conferences with 607 total draft choices:

A pair of Texas A&M teammates -- T Jake Matthews (Atlanta, No. 6) and WR Mike Evans (No. 7, Tampa Bay) -- were selected back-to back early in Round 1. This marks the first time in school history two Aggies have been selected with back-to-back top 10 picks.