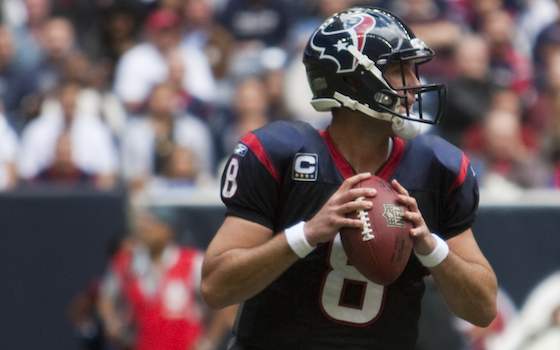 In need of a dependable quarterback, the Oakland Raiders will ship a late-round pick in the 2014 NFL Draft to the Houston Texans for play-caller Matt Schaub.

The trade will be finalized once Schaub passes his physical, according to a source.

Schaub, who has a $14.5 million salary-cap figure and a $10 million base salary for 2014, became expendable when the Texans signed former Tennessee Titans quarterback Ryan Fitzpatrick to a two-year deal Thursday night.

The Raiders currently have three quarterbacks on their roster in Terrelle Pryor, Matt McGloin and Trent Edwards. Coach Dennis Allen recently said he was not sure whether the team's quarterback of the future is in the locker room at this time.

Aside from the Raiders, the Cleveland Browns also expressed some interest in Schaub, who could have been reunited with former offensive coordinator Kyle Shanahan.

The trade between Oakland and Houston, two teams scheduled to pick in the top five, could impact the 2014 draft and how high quarterbacks will be selected.

After leading the Texans to back-to-back AFC South Division titles in 2011 and 2012, Schaub struggled early last season before being benched in favor of rookie Case Keenum in October.

The 10-year veteran regained the starting job in late December but could not help the Texans avoid finishing the season with a 14-game losing streak, the longest skid in franchise history.

A two-time Pro Bowler, Schaub has eclipsed 4,000 passing yards three times in his career. The 32-year-old spent the past seven seasons as the Texans' starting quarterback.