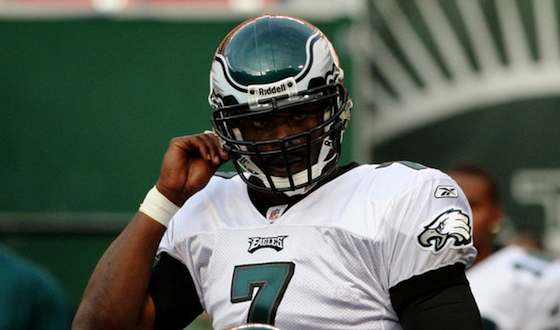 Michael Vick hopes to land the starting quarterback job with the New York Jets after after signing for one year and $5 million.

With Mark Sanchez cut by the team, Vick and incumbent Geno Smith are expected to compete for the starting post.

"As of now, Geno is the starting quarterback for this football team," Vick said in a conference call with reporters. "From this point on, we're going to compete every day."

Jets coach Rex Ryan said that Geno Smith going to be hard to beat out regardless of the competition a few hours before Vick's arrival was announced.

His play has declined in recent years, but he insisted it was caused by injuries and that he's not washed up.

"I got injured, and Nick Foles came in and played great," said Vick, 33. "It wasn't because of my play or because I didn't have anything left in the tank."

Vick joined the Eagles in 2009 when they already had Donovan McNabb and Kevin Kolb on their roster.

After the Eagles traded McNabb and Kolb had a concussion in 2010, Vick took over the starting job and played some of the best football of his career, leading the Eagles to a playoff berth.

He was rewarded with a long-term contract but was plagued by injuries and interceptions in 2011 and 2012.