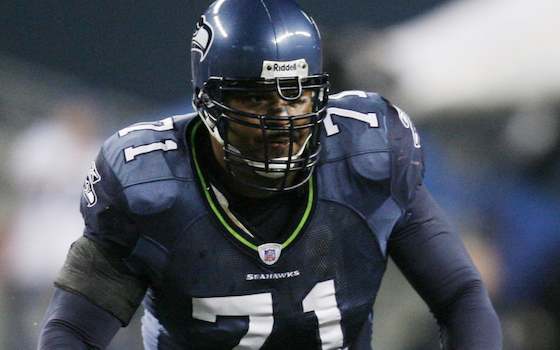 All seven men were on hand during the announcement Saturday at "NFL Honors" held at Radio City Music Hall.

A selection committee of 46 voters selected these players from a group of 126 nominees, which was then narrowed to semifinalists and then finalists.

Jones, who was in his first year of eligibility, is arguably the greatest left tackle of all-time whose agility and power were unmatched.

He made the first or second-team All-Pro six times, and the Pro Bowl nine times.

Brooks' leadership and intelligence helped to define the weakside linebacker position in the Tampa Bay Buccaneers' defense of the 2000's.

He joins Jones in an exclusive club of players enshrined in their first year of eligibility.

He set the NFL record with 22.5 sacks in a season in 2001, totaled a career-high 62 tackles, and helped the Giants win the Super Bowl in 2007 over the previously undefeated New England Patriots.

Reed, the longtime Buffalo Bills receiver, led the AFC in receiving in 1989 and joined Jerry Rice as one of just two players to record 13 separate 50-catch seasons.

He was a big part of the team's success in the early 1990s, going to four straight Super Bowls from 1990-93, and his 27 receptions in the Super Bowl rank second all time.

Longtime Arizona Cardinals defensive back Aeneas Williams was named to eight Pro Bowls in his career, including one as a safety when he was 35 years old.

He led the league in interceptions twice and was a first-team All Pro selection four times.

Humphrey won the 1968 NFL Defensive Rookie of the Year award and made eight different All-NFL or All-Pro teams. He earned 122 sacks in his career, although this did not become an official statistic until after he retired.

Guy is the first punter to ever make the Hall of Fame. He made seven Pro Bowls in his first eight years in the league, and was also a member of three Super Bowl-winning teams in 1976, 1980 and 1983.

The award for the best punter in college football every year is named the Ray Guy Award.

The seven men chosen will start a seven-month process that will end in enshrinement in Canton over the summer.