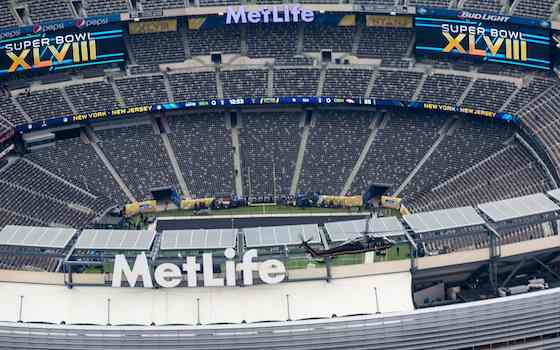 The Seattle Seahawks dominant performance in Super Bowl XLVIII, defeating the Denver Broncos 43-8, the largest margin of victory in a Super Bowl in 21 years, was watched by an average audience of 111.5 million people, more than any television program in U.S. history, surpassing the previous mark of 111.3 million set by a much more closely contested Super Bowl XLVI (New York Giants - New England Patriots) on NBC.

Super Bowl XLVIII posted a 46.4/69, matching the household rating and share for Super Bowl XLVII (Baltimore - San Francisco) a year ago, according to fast national figures issued today by Nielsen, and both, along with Super Bowl XVIII and XIX tie, as the seventh highest-rated Super Bowls ever.

Interest in the game, the first Super Bowl ever played in an outdoor, cold-weather location, and the nation's No. 1 media market, was unprecedented. The rating at kickoff, 44.5/70, ranks as the highest on record, and +12% over the kickoff rating a year ago, suggesting that a more competitive game would have resulted in even higher viewership. Ratings climbed through the first half and peaked at a 47.9/71 from 7:30-8:00 PM ET as Seattle established a commanding 22-0 halftime lead. Viewership remained impressively high through the fourth quarter despite the fact that Seattle had the game well in hand. The game earned a 44.0/63 from 9:30-conclusion, meaning that even in the closing minutes the rating was only 5% lower than it was for the entire game.

The record-breaking trend also extended to the Pepsi Super Bowl XLVIII Halftime Show, with 115.3 million viewers watching Bruno Mars and the Red Hot Chili Peppers perform. That figure surpasses the 110.8 million delivered by Beyonce last year and the prior record of 114.0 million set by Madonna two years ago.

Live coverage of Super Bowl XLVIII was also available in the U.S. on a Spanish language channel, FOX Deportes, for the first time ever and on digital platforms via FOX Sports GO and FOXSports.com. FOX Deportes averaged 561,000 viewers, the most-watched non-soccer sports event in Spanish cable history. The live stream averaged 528,000 viewers to become the most-watched live stream of a single sports event in history. The contributions of FOX Deportes and the new media outlets raise total viewing of the Super Bowl on an average minute basis to 112.6 million viewers. (Streaming information reported by Adobe Analytics.)

Social media was ablaze before, during and after Super Bowl XLVIII with 25.3 million total tweets composed by 5.6 million authors. The most active moments during the game were Percy Harvin's kickoff return for a touchdown to start the second half (429,000 tweets), the conclusion of the Bruno Mars / Red Hot Chili Peppers halftime performance (424,000) and MVP Malcolm Smith's interception return for a touchdown (300,000). Following the game, activity about the Super Bowl peaked at over 500,000 tweets shortly after 10:00 PM ET.

Super Bowl XLVIII caps a history-making year in the two-decade history of FOX Sports. Over the last 12 months FOX has posted viewership increases for every one of its marquee events including the Daytona 500, MLB All-Star Game, League Championship Series, World Series, Big Ten Championship, NFL regular season, NFC Playoffs and now the single most-watched show of all time, Super Bowl XLVIII, with all of this coming alongside successful launches of FOX Sports 1, FOX Sports 2, and FOX Sports Go.