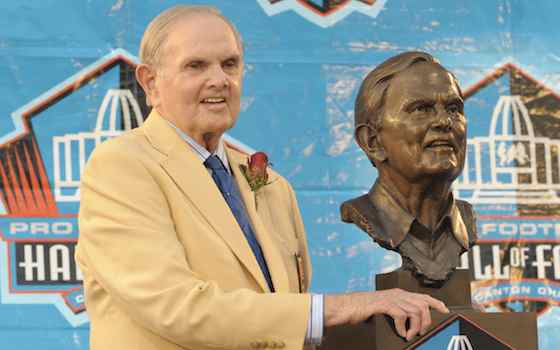 The Buffalo Bills have announced that longtime owner Ralph Wilson passed away. He was 95.

Bills president Russ Brandon, who made the announcement at the NFL's winter meetings in Orlando, Florida, did not mention the cause of death but Wilson's health was failing for several years.

"I speak for everyone within the Bills organization when I say that we are all suffering a deep and profound sadness with the passing of our Hall of Fame owner Mr. Wilson," Brandon said. "We have lost our founder, our mentor, our friend, and this is a very difficult time for us all."

Wilson established the Bills with the upstart American Football League in 1960, purchasing the team for $25,000 in 1959. Forbes estimates the franchise's current value at $870 million as of August 2013.

Brandon said Wilson was a pioneer in the American Football League and was instrumental in forging the merger between the AFL and the NFL.

The Bills made the Super Bowl four consecutive times in the 1990s under his watch, though the team never won a Super Bowl championship. The Bills did, however, win two AFL championships (1964 and 1965).

"Mr. Wilson had a relentless passion, a deep love for his Buffalo Bills, the City of Buffalo and the National Football League," Brandon said. "He also loved the Bills fans and all of the people of Western New York who embraced the Bills."

Wilson served the AFL and NFL in a variety of roles. He was president of the AFL, served on the AFL's Expansion Committee and also on the AFL-NFL Negotiations Committee.

Wilson was enshrined into the Pro Football Hall of Fame in 2009.

Ralph Wilson, the founder and owner of the NFL's Buffalo Bills, died on Tuesday at the age of 95. He was the oldest owner in the National Football League. owned the Bills for 54 years, making him the longest tenured owner in the NFL. Wilson grew up in Detroit, Michigan before going to college at the University of Virginia and attending law school at the University of Michigan. He served in the navy during World War II. When he came home he took over his father's insurance business, and eventually became a founding owner of the American Football league, which would later merge with the NFL. A true legend and icon, Wilson was elected to the Pro Fotball Hall of Fame in 2009