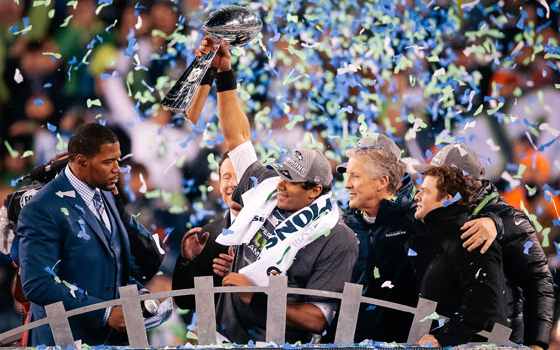 In the celebratory aftermath of the Seahawks' 43-8 win over the Broncos in Super Bowl XLVIII, Seattle CB Walter Thurmond III compared the Seahawks to a baseball team that has inflicted more pain than perhaps any other

In the celebratory aftermath of the Seahawks' 43-8 win over the Broncos in Super Bowl XLVIII, Seattle CB Walter Thurmond III compared Seattle's favorite franchise to a baseball team that has inflicted more pain than perhaps any other on the Emerald City.

"If (this) was like baseball with no salary cap, then we would be like the Yankees," Thurmond told USA Today. "Just hoarding guys and really creating a dynasty."

New York twice ousted the Mariners (2000, '01) from the postseason, erasing the best chances the club had to win a World Series since it began play at the Kingdome in 1977.

How extra sweet it was then, that the Seahawks stopped their 38-year title drought in East Rutherford, NJ, just a few miles from new Yankee Stadium, which was built across the street from the home to some of the Seattle's most heart-wrenching losses.

Thurmond's point -- ironic as it was to the typical Seattle sports fan who would rather plunge into Lake Washington in November than root for the Yankees -- provided a preview of a 2014 offseason that will test general manager John Schneider's ability to keep the Seahawks under the NFL's salary cap without tearing apart the roster that brought home the Lombardi Trophy for the first time in franchise history.

The Seahawks are 7/1 favorites to win the 2015 Super Bowl, or 9/2, according to Bovada.com, but those predictions come with the reality that Seattle will soon need to make some significant roster moves.

In his column, "Early Super Bowl Favorites for 2014," ESPN's John Clayton points out that the Seahawks have just $3 million in cap space. Seahawks WR Sidney Rice, DE Chris Clemons and/or TE Zach Miller will likely be cut, Clayton argues, so the club has flexibility to sign S Earl Thomas, WR Golden Tate, LT Russell Okung and DT/DE Michael Bennett, arguably the team's most valuable offseason acquisition. QB Russell Wilson, and CB Richard Sherman, both of whom will undoubtedly require hefty sums when their contracts expire, will be next after their original deals expire.

Before they start thinking about how to keep together the best team in the league, and one of the best defenses in NFL history, the Seahawks had one of the best parties Sunday night / Monday morning in Manhattan. Owner Paul Allen played the guitar with his band, "the Underthinkers," and Macklemore (who else?) held a special concert for a select group of fans and players.

Despite not getting any sleep, Carroll held a press conference Monday morning in snowy New York before the team was scheduled to fly back to Seattle.

Back in Seattle, Seahawks fans didn't sleep much, either. Car horns honked as people crowded the streets in Capitol Hill. Frat stars burned couches on University of Washington's Greek Row. People hung from street signs in Pioneer Square. Fights broke out in Belltown. Streets everywhere were blocked by rowdy fans.

More than anything, the Broncos were shocked following their embarrassing loss. From the moment center Manny Ramirez snapped the ball over QB Peyton Manning's head on the first play of the game, leading to a Seahawks safety, to their ineffective defense, to their special teams lapse to start the second half, leading to Percy Harvin's 87-yard kick-return touchdown, Denver was simply outplayed.

Denver Post columnist Woody Paige issued the ultimate diss, calling the Broncos performance one of the most offensive in Super Bowl history. No comparison was to low-brow for Paige, a frequenter on ESPN's show, "Around The Horn." He reverted to potty humor to try and contextualize how bad Denver played.

Harvin, meanwhile, led both teams with 45 rushing yards, which came from two end-arounds, or jet sweep plays, that Denver looked ill-prepared to stop. Harvin caught just one pass for five yards, but his 87-yard kick-return for a touchdown to begin the second half gave the Seahawks a 29-0 lead. ESPN.com's Jeffri Chadiha, longtime Seahawks doubter, was convinced of his greatness: He said Harvin was worth the six-year $67 million contract.

No offense to LB Malcolm Smith, but Seahawks QB Russell Wilson could have been the game's MVP. Wilson finished 18 of 25 for 206 yards and two touchdowns, good for a 88.1 QBR (out of 100), the second highest for a quarterback in the Super Bowl dating back to 2006.