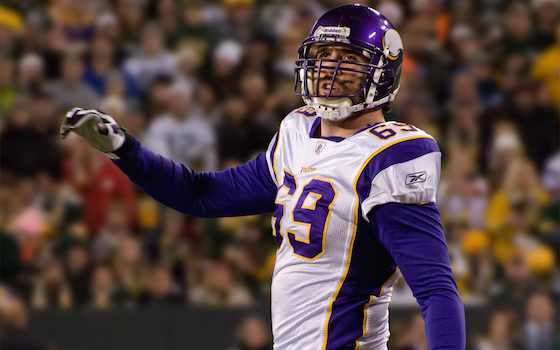 According to several media reports, the contract includes $15.5 million in guaranteed money and could void after three years and $24 million.

After signing the deal, Allen issued a statement, thanking the Minnesota Vikings and addressing his future in Chicago.

"I'd like to take a moment to thank my former teammates, coaches and the staff at the Minnesota Vikings for all of their inspiring work and dedication," Allen said. "Perhaps more importantly I would like to thank the fans and the Minnesota community."

"I can only hope that I have left with you all, with even a fraction of the positive support and impact you have had on my life, my foundation and my family," he added.

Allen said he's "very excited about this next chapter in my career with the Chicago Bears and can't wait to see what the future holds for us".

The Bears recently cleared $4 million in cap space by restructuring quarterback Jay Cutler's contract, according to multiple reports. The Bears converted $5 million of his base salary into a signing bonus and prorated that over five years, the reports said.

Allen has 128.5 career sacks, 12th most in NFL history. He has seven consecutive double-digit-sack seasons, including 11.5 last season with Minnesota -- where he made his mark after the Vikings traded for him in 2008.

Allen needs 4.5 sacks to move into sole possession of 10th place, and he could climb to as high as fifth next season and pass Strahan if he's able to record 13.5 sacks.

He needs 72.5 sacks to tie Bruce Smith for the career record, but considering he hasn't been below 10 sacks in a season since 2006, he has a chance to significantly add to his numbers.