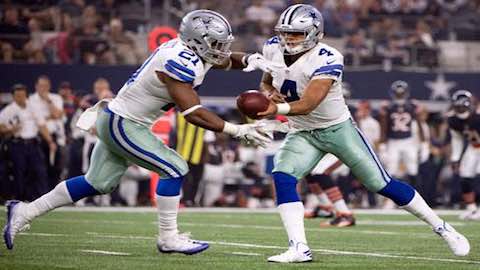 As the NFL enters Week 6, there are 10 teams with one loss or fewer, including the league's only unbeaten team, the 5-0 Minnesota Vikings. Here's a preview of some of the key games in Week 6

"We have good players and they do things right," says Minnesota head coach MIKE ZIMMER about his team's 5-0 start. "I don't think it's a big secret. They go out and they perform."

The Vikings are only the second team since 1933 to start 5-0 and have no interceptions, joining the 1969 Los Angeles Rams. Minnesota has started two quarterbacks this season -- SHAUN HILL (1-0) and SAM BRADFORD (4-0). Bradford, who was acquired via trade by the Vikings before the start of the regular season, is the first quarterback since 1973 (JOHN HADL) to win each of his first four career starts with a new team while throwing at least six touchdown passes with no interceptions.

Minnesota is one of three teams -- Atlanta (four) and Dallas (four) -- which has currently won at least four consecutive games.

The Falcons, who lead the NFC South, handed the defending Super Bowl champion Denver Broncos their first loss of the season last week by posting a 23-16 win at Denver. Atlanta, which defeated the defending NFC champion Carolina Panthers 48-33 in Week 4, are the third team to defeat the previous season's Super Bowl clubs in back-to-back games (1982 San Diego Chargers and 1985 Detroit Lions).

"That was a very good team win for us," says Falcons head coach DAN QUINN about the victory in Denver. "We knew it was going to be an all-day fight and it certainly was. I think our toughness and resiliency was certainly on hand and our guys battled. And now we reset and go through our process to get ready to play ball again."

Dallas, led by rookie quarterback Dak Prescott and rookie running back Ezekiel Elliott, sits in first place in the NFC East. The Cowboys are the first team in NFL history to have a rookie quarterback with at least 1,000 passing yards (Prescott, 1,239 yards) and a rookie running back with at least 500 rushing yards (Elliott, NFL-best 546 yards) in the team's first five games of a season.

"We just have to take it one game at a time, one week at a time, one day at a time," says Prescott. "We've done a great job of putting the past behind us -- win or lose -- and just focusing on what's in front of us. Right now, that's the next team."

There are still plenty of games remaining in the season for teams to turn it around. Since 1990, 54 teams have advanced to the postseason after starting the season 2-3 or worse. There were four such teams last season -- Houston (1-4), Kansas City (1-4), Seattle (2-3) and Washington (2-3) -- including two teams which rebounded from 1-4 starts.

So don't count anyone out. The only thing predictable about the NFL is the unpredictability.

Some of the key games in Week 6:

Cincinnati wide receiver A.J. GREEN ranks first in the AFC with 518 receiving yards and is second in the conference with 36 receptions.

Dallas rookie running back EZEKIEL ELLIOTT leads the NFL with 546 rushing yards, the fifth-most in NFL history in a player's first five games to start a career. 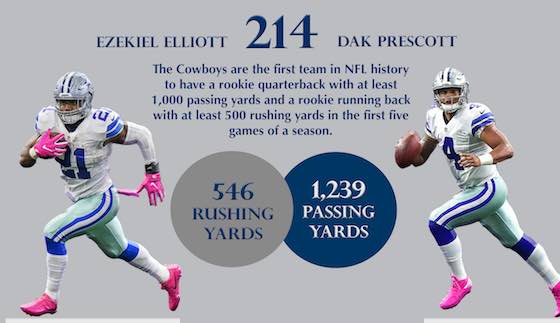 Green Bay quarterback AARON RODGERS has posted a 49-12 (.803) record at home in his career, including last week's 23-16 win over the New York Giants. Including the postseason, Rodgers has won four consecutive starts against the Cowboys with nine touchdowns, no interceptions and a 112 passer rating.

Packers running back EDDIE LACY has rushed for at least 100 yards in all three meetings against Dallas (including the postseason), racking up 366 rushing yards (122 per game) and two touchdowns.

Falcons wide receiver Julio Jones ranks third in the league with 517 receiving yards and is averaging 103.4 yards per game. Jones has 24 receptions and his 21.5 yards per catch mark leads the NFL (minimum 20 catches).

The Seahawks had a bye in Week 5 and have won their past two games.

In Week 4, Seattle quarterback RUSSELL WILSON passed for 309 yards and three touchdowns with no interceptions in a 27-17 win at the New York Jets. Wilson has 25 career games with multiple touchdown passes and no interceptions, the most by a player in NFL history in his first five seasons.

Colts quarterback ANDREW LUCK threw a game-winning 35-yard touchdown pass to wide receiver T.Y. HILTON with 3:43 remaining in Indianapolis' 29-23 win over Chicago in Week 5. It marked the fourth game-winning touchdown pass from Luck to Hilton in the final 4:00 of the fourth quarter since 2013, the most by any teammates during that span.

The Texans are 3-0 at home this season and have won seven of their past eight regular-season home games.

Houston defensive end JADEVEON CLOWNEY leads the NFL with eight tackles for a loss this season and had a career-high four in last week's game against Minnesota.

New York wide receiver BRANDON MARSHALL has seven 100-yard receiving games in his past 11 games. In 21 career games with the Jets, Marshall has 16 touchdown catches.

Jets defensive tackle LEONARD WILLIAMS has 7.5 sacks and two forced fumbles in his past 10 games, including a sack and forced fumble last week at Pittsburgh.

Cardinals running back DAVID JOHNSON leads the NFL with 695 scrimmage yards and is the first player in franchise history to record at least 100 scrimmage yards in each of the team's first five games of a season.