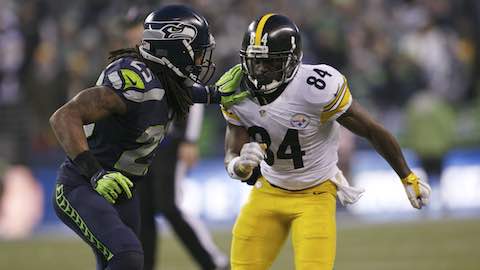 Atlanta's Julio Jones is the latest big-deal wide receiver to fall into the crosshairs of Seahawks CB Richard Sherman. As the Jets found with Brandon Marshall, it was not wise to pester the man.

“It is what it is. You figure it out and (are a) good enough player to get it done.”

Even Jones isn’t cooperating with hyping the fight. He was held out of the Falcons’ practice at Husky Stadium — you read that right; the Falcons so miss Hurricane Matthew that they are staying the week to see Seattle’s worst storm of the year — with a sore knee.

But if Jones is healthy, which is likely, and the Seahawks coaches realize Jones is three yards shy of being the NFL receiving yards leader, also likely, then Sherman will be ordered to perch upon Jones’ face mask for much of the afternoon.

Increasingly, the Seahawks are releasing him from his usual left-side duties to travel with a premier receiver, such as in the most recent game against the Jets and their star WR Brandon Marshall.

Some Seahawks fans may be dismayed by the travel plan after Sherman gave up a touchdown and three other receptions for 89 yards to Marshall, who at 32 remains one of the game’s best receivers.

Overlooked was the fact that the Jets targeted him 12 times, and Sherman intercepted two. The Jets tried to force the offense to Marshall, and it worked for a half. Then it didn’t.

But the Falcons pose a different set of problems, because they have a quality running game and other good receivers who produce an NFL-best averages of 454.7 yards and 35 points a game, 60 yards more than runner-up Dallas (the Seahawks are 28th at 357.5). The Falcons had a season-best game Sunday when they won 23-16 in Denver, the first loss for the defending champion Broncos and their stellar defense.

On Oct. 2, Jones had the sixth 300-yard receiving game in NFL history during a 45-32 win over New Orleans. But the Falcons needed only two catches for 29 yards from him to beat the Broncos.

Said ESPN analyst Merril Hodge: “Atlanta is the most exciting offense in football. They do more flow and misdirection than anybody, and they have a ton of mismatches across the board. Julio Jones has one catch, they win. Then they have 300 yards and they win. That tells you how flexible they are.”

“We just take a bucket full of thoughts and decide what seems to fit best,” Carroll said. The Falcons may be content to use Jones as a decoy and put pressure on CB Deshawn Shead, or pound away on Sherman in pursuit of a mistake.

“It’s not just (Sherman),” Carroll said. “It has to do with the other guys. If the (opponent) is flipping (sides), that's part of the variable also.

“We're at a point where we can do whatever we need to do now.”

Whenever the matchup occurs, it will be between experienced athletes at their professional peaks. But when asked who had the tougher job, cornerback or wide receiver, Sherman left no doubt.

“Corner — because you never leave the field,” he said. “You don't get to sub, you don't get to rotate. If there's two receivers out there, you're out there. It's not like you get to swap — this receiver went out so somebody else comes in. If they're tired, they get to sub out and bring someone else in.

“That was one of the challenges when we played Denver in the Super Bowl. They're rotating the receivers in and out, every three plays, and we're out there. They get to get fresh, they get to take a breather. Sometimes the receivers never even go back to the huddle, they'll just run out to the sideline. You turn around, you're 60 yards down the field, (then) a new receiver is standing there. That's something that some people don't think about.”

If Jones is a full go Sunday, Sherman may be the first to suggest that traveling is over-rated.

Republican presidential candidate Donald Trump’s description last week of his degrading remarks about groping women as “locker-room talk” did not sit well with Sherman, adding to the chorus of condemnation around the sports world.

“I think it was a cop-out,” Sherman said. “He needed some way to divert the attention from himself. That's not how most people talk in the locker room, and I think a lot of athletes would say the same.

“But it allows him to divert the conversation away from him, which was the focus.”

Monday, teammate Michael Bennett said he was “irate” over the remarks. WR Doug Baldwin said, “Have I heard things like that in the locker room? Not that aggressive. You’ve got to treat people right and treat women with respect.”