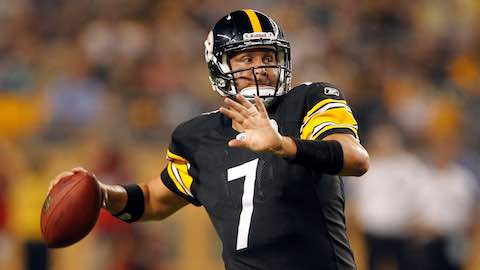 Here's what to look for during Week 6 of the NFL 2016 regular season.

Since the current 12-team playoff format was instituted in 1990, 17 teams have rebounded from being at least three games under .500 after the season's first five weeks or later to qualify for the postseason. That includes seven 1-4 teams that won their division.

Last year, the Houston Texans bounced back from a 2-5 record after 7 games to win the AFC South, while the Kansas City Chiefs rebounded from a 1-5 start and advanced to the AFC Divisional Playoffs.

NFL Teams 3 or more games below .500 after Week 5 or later and made the playoffs

Steve Smith: Catch Me If You Can

With 12 catches on Sunday against the New York Giants, Smith would become the 14th player in NFL history to record 1,000 career receptions.

If Ryan, Carr and Rivers reach 15 touchdown passes this week, it will be the second time in NFL history four different quarterbacks have thrown for at least 15 touchdowns in the first six weeks of a season.

Pittsburgh's BEN ROETHLISBERGER threw four touchdown passes last week to bring his league-leading total to 15. With another four-touchdown performance on Sunday against Miami, Roethlisberger would be tied for the fourth-most passing touchdowns through the first six games of a season in the Super Bowl era.

Buffalo's LORENZO ALEXANDER tallied three sacks last week to bring his season total to seven. With another three-sack performance on Sunday against San Francisco, Alexander would be tied for the most sacks through the first six weeks of a season in the past 15 years.

The players with the most sacks through the first six weeks of a season since 2001:

Most Sacks Through First Six Weeks of a Season

Tennessee quarterback MARCUS MARIOTA accounted for four touchdowns last week (three passing, one rushing). This marked the fourth time in his career Mariota had four touchdowns in a single game, making him the second quarterback to have four four-touchdown games in the first 17 games of his career (CHARLIE CONERLY, 1948-49).

With another four-touchdown performance on Sunday against Cleveland, Mariota would become the first quarterback to have five four-touchdown games in his first 18 games in NFL history.