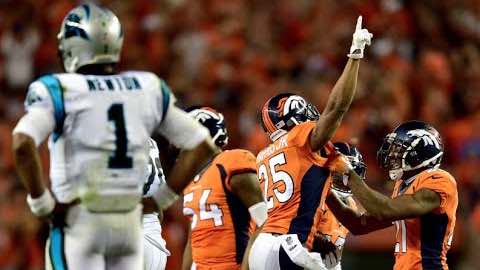 Here's a look back at NFL Kickoff Weekend 2016 top performances

Six games in Week 1 were decided by two points or fewer, the most of any week in NFL history.

Kickoff Weekend 2016 continued the 2015 trend of close games, as 75 percent were within one score in the fourth quarter of Kickoff Weekend last season. In 2015, 140 of 256 games (54.7 percent) were decided by eight points or fewer, the most of any season in NFL history.

The DENVER BRONCOS defeated the Carolina Panthers 21-20 on Thursday night. The Broncos improved their record to 43-13-1 (.768) in home openers, the top mark in the NFL. Denver has won 23 of its past 26 home openers.

NFL Teams With the Best Winning Percentage in Home Openers

The NEW ENGLAND PATRIOTS, who defeated the Arizona Cardinals 23-21 on Sunday Night Football, now have 32 wins on Kickoff Weekend, tied with San Diego for the fourth-most among AFC teams.

Philadelphia rookie quarterback CARSON WENTZ, the No. 2 overall pick in the 2016 NFL Draft, led the Eagles to a 29-10 victory over Cleveland on Kickoff Weekend. Dallas rookie quarterback DAK PRESCOTT, who was chosen in the fourth round (No. 135 overall), also started in Week 1.

Wentz completed 22 of 37 passes (59.5 percent) for 278 yards with two touchdowns and no interceptions for a 101.0 passer rating in the Eagles' 29-10 victory over Cleveland. He is the first Eagles rookie to start at quarterback in a season opener since DAVEY O'BRIEN in 1939.

Prescott passed for 227 yards in the Cowboys' loss to the Giants. Prescott and running back EZEKIEL ELLIOTT are the first rookie QB and RB tandem to start a season opener for the Cowboys since Pro Football Hall of Fame quarterback ROGER STAUBACH and running back CALVIN HILL in 1969.

The NFL has now had at least one rookie quarterback start in Week 1 in nine consecutive seasons, the longest streak since at least 1950.

Rookie Quarterbacks to Start in Week 1 since 2008

Brees Off to Fast Start

Colts quarterback Andrew Luck passed for 385 yards with four touchdowns and no interceptions for a 119.5 passer rating in the Colts' Kickoff Weekend 39-35 loss against Detroit.

Fitzgerald, who now has 100 career touchdown receptions, became the 10th player in NFL history to reach the milestone.

JERRY RICE has the most career Week 1 catches with 92. Rice, Reed and Harrison are all members of the Pro Football Hall of Fame.

Houston wide receiver WILL FULLER had five catches for 107 yards in the Texans' 23-14 victory against Chicago. Fuller, who was selected 21st overall in the 2016 NFL Draft, became the first rookie first-round draft pick to gain 100 yards receiving in his team's first game since Pittsburgh's LOUIS LIPP in 1984.

The KANSAS CITY CHIEFS extended their regular-season winning streak to 11 games with a 33-27 overtime victory over San Diego. The Chiefs overcame a 21-point deficit and are the first team in NFL history to extend a winning streak of at least 10 games with a 21+ point comeback victory.

Oakland quarterback DEREK CARR connected with wide receiver MICHAEL CRABTREE on the game-winning two-point conversion with 47 seconds remaining in the Raiders' 35-34 win at New Orleans. The Raiders are the fourth team to score the game-winning points on a two-point conversion in the final minute of the fourth quarter and the first to do so in a season opener. The other three teams to accomplish the feat are the 2002 Minnesota Vikings (December 15, 2002), 2005 Tampa Bay Buccaneers (November 13, 2005) and 2008 Denver Broncos (September 14, 2008).

Tampa Bay quarterback JAMEIS WINSTON threw four touchdown passes in the Buccaneers' 31-24 win at Atlanta. Winston (22 years, 249 days) is the fourth-youngest quarterback to throw at least four touchdown passes on Kickoff Weekend. The only three players to accomplish ​the feat at a younger age are Pro Football Hall of Famer FRAN TARKENTON (21 years, 226 days) in 1961, MARCUS MARIOTA (21 years, 318 days) in 2015 and DREW BLEDSOE (22 years, 203 days) in 1994.