NFL 2016: Since It's Rams, Maybe Russell Wilson Should Sit 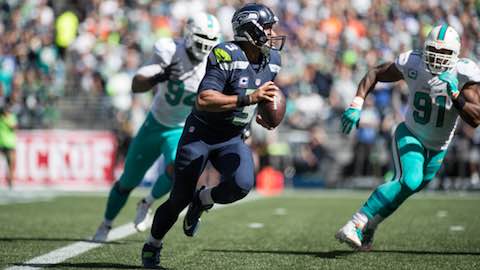 If we all didn't know Russell Wilson to be the competitor that he is, it would be possible to speculate that the Seahawks quarterback picked a good week to get injured. In his eight career games against the Rams, he has been sacked 35 times.

Seahawks C Justin Britt admits Rams DT Aaron Donald got into his head. The bigger Seattle worry is whether Britt and linemates can keep Rams off Wilson's back. They sacked him 10 times last season.

The Rams defense always seems to save its worst for Wilson. In a sweep of Seattle last season, the Rams pulled down Wilson six times in the 34-31 overtime loss in September, and four times in the 23-17 loss in December — the Rams’ first win in Seattle since a playoff game in 2005.

Sunday in the hoary Coliseum, filled with 92,000 fans amped for the first NFL game in Los Angeles in 21 years, the football world will again see what the Rams do best and what the Seahawks do worst — rush the passer and protect the passer, respectively.

Even though Wilson was a full participant in practice Wednesday, the thought of him pirouetting flawlessly away from mobile meanies Aaron Donald, Robert Quinn, Michael Brockers and William Hayes, merely a week after getting his right ankle stomped on by Ndamukong Suh, seems a stretch.

"His attitude is as charged up as you can imagine,” he said. “As always, he's excited to prove that he can make this back.

“He's half-crazy about proving it.”

No one has become rich betting the under on Wilson. Still, it would be hard to blame him Sunday if he chose merely to shovel the ball forward upon receiving the snap. The average release time for NFL passes is about 2.7 seconds, but that’s about two seconds more than Wilson seems to get against the Rams.

In the opener against the Dolphins, Wilson, despite play-calling that was largely a two-step drop and fire, was sacked three times for 18 yards in losses. The offense had uncharacteristically few explosive plays, the longest 24 yards.

That was due largely to the debut of a re-made offensive line further compromised by the absence of first-round draft pick RG Germain Ifedi (ankle). Asked to assess offensive productivity, line coach Tom Cable was less than effusive.

“OK, as an offense — just OK,” he said. “There’s a lot of places to play better, more consistent.”

Cable said C Justin Britt and LG Mark Glowinski were “outstanding,” RG J’Marcus Webb, Ifedi’s replacement, “had his struggles,” and tackles Bradley Sowell and Garry Gilliam as “OK — they have to do better.”

And they have to do it against Donald and mates, who were embarrassed on Monday Night Football 28-0 by mediocre San Francisco. According to Britt, who in his third year as a Seattle starter, is something of an eminence when it comes to playing the Rams, the Niners’ plan to thwart the rush seemed simple.

It is the contention of Britt that the Rams’ rush resume is so formidable that it gets in linemen’s heads. He admitted that happened to him.

“You can overthink,” he said. “Donald obviously is one of the best D-tackles in the game. He gets in people’s heads. They play fearfully. Just because of his resume. You can throw me (in that category).

“If you don’t understand what you’re doing and how you’re doing it, you don’t trust yourself. You’ll fight that feeling of not wanting to be part of his resume. The second time last season we played him, I was a little more comfortable.”

Nothing about Sunday’s set-up looks comfortable for Seattle, including the fact that they no longer have the club of RB Marshawn Lynch to swing, which pleases Donald no end.

"I'm not mad about it at all,” Donald said via teleconference, “that I'm not going to see that guy. That's definitely a tough running back. It's going to be different.

“But I'm happy that guy isn't suiting up."

Lynch is no longer in Donald’s head, but Sunday’s outcome may depend on whether the Seahawks get in his face — and stay there.