NFL 2016: Russell Wilson Establishing Himself As A Comeback King 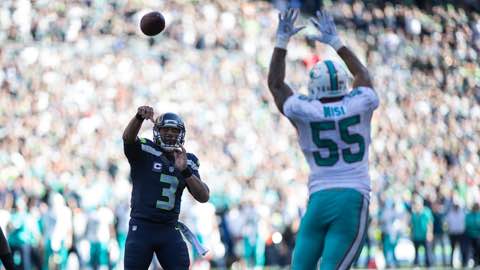 Seahawks QB Russell Wilson has orchestrated 19 game-winning drives, the most by any player in NFL history after the first 75 games of a career.

After snatching a game-winning, two-yard touchdown pass from Russell Wilson with 31 seconds remaining, WR Doug Baldwin summed up his quarterback in a mere nine words: "He has shown a propensity to do miraculous things." Aside from the fact that Baldwin might be the first wideout in NFL history to use “propensity” in a sentence, some might describe his words as hyperbole. They are not.

The 14-play, 75-yard drive that Wilson orchestrated over the final four minutes, ending with the Baldwin touchdown on second-and-goal, marked the 19th game-winning march of Wilson’s five-year career. It lifted the Seahawks to a 12-10 victory over the Miami Dolphins that was a lot tougher for Seattle than bookmakers figured it would be.

Wilson is within one game-winning drive of tying the franchise record of 20, held jointly by Dave Krieg (1983-91) and Matt Hasselbeck (2001-10). Krieg set the mark over 136 games (regular season and playoffs) and Hasselbeck matched it in 149.

Wilson played in his 75th game.

Among the many records held by Peyton Manning is the one for most game-winning drives. Manning orchestrated 56 over 18 seasons with the Indianapolis Colts and Denver Broncos. Hall of Famer Dan Marino had 51 and Tom Brady has 48.

Six of the top 10 leaders in game-winning drives are in the Hall of Fame and the other four -- Manning, Brady, Drew Brees and Ben Roethlisberger -- are enshrinement locks when they become eligible.

Since Wilson entered the NFL in 2012, his 19 game-winning drives have occurred in the fourth quarter (Tony Romo has 16 and Andrew Luck 14). With Wilson's fade route to Baldwin Sunday, nine of the 19 ended with Wilson touchdown passes.

Three have come inside the final minute, including the most controversial, a 24-yarder to Golden Tate Sept. 24, 2012 with 0:00 showing on the Clink clock. That play quickly entered pro football lore as the "Fail Mary." Wilson also tossed a 23-yard game winner with 47 seconds to play to TE Luke Willson to defeat Carolina Oct. 26, 2014.

Surely the most dramatic of Wilson's game-winning drives was the one that ended with his 35-yard perfecto to WR Jermaine Kearse with 11:41 left in overtime Jan. 18, 2015 that beat Green Bay 28-22 and claim a spot in Super Bowl XLIX.

Coach Pete Carroll said on his Monday morning radio show that Russell Wilson has a sprain mild enough to probably allow him to play Sunday. But the Seahawks are scanning the free agent QB list.

X-rays revealed no structural damage. But Wilson was clearly diminshed after being stepped on by Dolphins all-pro DT Ndamukong Suh -- accidentally, not intentionally -- during a sack with 11 minutes remaining in the third quarter. He finished the game, completing six of nine passes in the game-winning final drive.

"He's got a sprained ankle, a little bit of swelling and he'll make it through," Carroll said on his weekly radio appearance on ESPN 710. "It's nothing very serious."