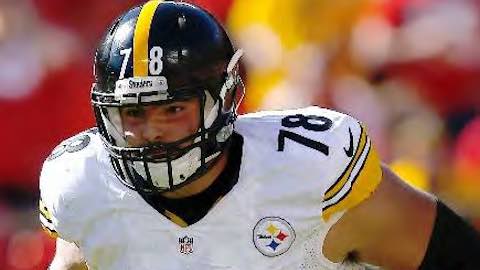 Every season, Hispanic players are playing a role in the NFL.

Pittsburgh Steelers tackle ALEJANDRO VILLANUEVA entered the NFL as an undrafted free agent and spent the 2014 season on the practice squad. Last year, he earned a starting job, starting 12 games at left tackle for the Steelers.

"I love challenges," says Villanueva, who started 24 of 28 games at West Point playing wide receiver, defensive line and left tackle. "I love competing, finding new things to do that challenge me as a person, and I think this has been another great experience that has definitely challenged me. It hasn't been easy, but I didn't want it to be easy either." Villanueva's parents are both natives of Spain, and his father, Ignacio, served in the United States as part of the Spanish Navy.

San Francisco 49ers linebacker SHAYNE SKOV moved to Mexico when he was nine years old and his time in Guadalajara, Mexico has played a pivotal role in his life. Every year, Skov returns to where he learned to play football to give back to the community that means so much to him.

"It is difficult to get to the NFL, but we have seen in recent years several Latin players who have had a chance," says Skov. "I believe that with the growth of the sport, we will see more."

During the offseason, Houston Texans linebacker WHITNEY MERCILUS (below) hosted a PLAY 60 youth football camp at the National Polytechnic Institute Zacatenco in Mexico City, Mexico. Mercilus led 250 children, ages 6-14, through various drills to highlight the importance of staying active and teaching them skills they could take back to Tochito, the NFL's Flag Football program in Mexico.

"I am very happy to have met some of our Mexican fans, but I'm even happier after seeing the enthusiasm of the children who participated in the clinic," says Mercilus. "As the game nears, I'm sure the Texans' fan base in Mexico will increase, and I am excited to know that my team has a following in Mexico."

Mercilus was visiting Mexico in advance of the NFL's return to the country when the Oakland Raiders host the Texans at Estadio Azteca on November 21 in the first-ever Monday Night Football game played outside of the United States.

"It's an international stage and we will not miss the opportunity to attract new fans," says Mercilus. "We will give a good show that day and it will be a great game."

The NFL is continuing its partnership with Pro Football Hall of Fame tackle ANTHONY MU--OZ to host NFL PLAY 60 Character Camps. The non-contact football camps will take place in several NFL markets during the summer. Each site will welcome 300 predominantly-Hispanic boys and girls ages 9-13 with little or no football experience from local youth organizations. The program will also work in collaboration with USA Football and its NFL FLAG curriculum, which introduces participants to be physically active through non-contact, continuous action while learning the fundamentals of football, lessons in teamwork and sportsmanship.

In addition, the camps will teach character values as well as promote NFL PLAY 60's health and fitness message.

Since the inception of NFL PLAY 60 Character Camps in 2012, 50 camps have been held impacting nearly 20,000 youth across the country.

The NFL's celebration of Hispanic Heritage Month dates back to 2002 when then-Commissioner PAUL TAGLIABUE made it a league priority to serve the Hispanic market, forming an internal task force of league and club executives to analyze the NFL's activities, consult with leaders in the Hispanic-American community, and recommend a comprehensive approach toward the future. The initiative has continued to grow annually since then.

Hispanic Players in the NFL