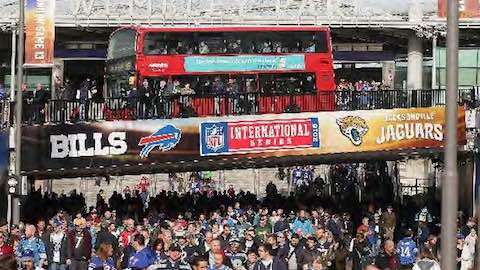 The NFL Internartional Series continues this season with four games in 2016. Here's a look at the three games in the UK and the one in Mexico

In response to outstanding and growing fan support of football in the United Kingdom, the NFL will once again play three regular season games in the UK, including one game at a new venue, Twickenham Stadium. Additionally, the league extended its agreement to play games at London's Wembley Stadium through the 2020 season.

"The passion our UK fans have shown for the NFL is overwhelming," says NFL Commissioner Roger Goodell. "We are very appreciative of the strong and growing fan support, not only for the games, but for all of the related NFL events we host in the UK throughout the year. We look forward to welcoming new fans to their first NFL game in 2016 and welcoming back thousands of others that are helping our sport grow to new levels of popularity in London and beyond."

The Cincinnati Bengals, Indianapolis Colts and Washington will all play their first regular-season game in the UK this season -- which marks a total of 23 different teams to play in the International Series in London since it began in 2007. Each game will kick off at 9:30 AM ET.

In the first of three 2016 London games, the Jacksonville Jaguars will host the Colts in an AFC South division contest on October 2 at Wembley.

The Jaguars have committed to playing a home game in the UK through 2020, all at Wembley, and will return to the UK for the fourth consecutive year. The Colts make their first trip to London and play in the franchise's first international game since a 2010 preseason contest against the Buffalo Bills in Toronto, Canada.

"Our four-year London initiative has been every bit as rewarding as we anticipated, certainly due in large part to the league's commitment to the UK and the world class experience that Wembley Stadium has provided the Jaguars, our fans and our partners," says Jaguars owner SHAD KHAN. "Our interest in extending our agreement to play a home game each season in London is nothing new."

"It's good for our brand and it's good for the league," says PETE WARD, the Colts' Chief Operating Officer.

In the second 2016 London game, the Los Angeles Rams will host the New York Giants on October 23 in the first-ever NFL game at Twickenham Stadium.

The Rams, who faced the New England Patriots at Wembley in 2012, will play their second regular season game in London.

"And I think the league wants to grow their brand in that market too."

The Giants will make their first trip to London since defeating the Miami Dolphins in the inaugural International Series game in 2007, a season that ended with New York winning Super Bowl XLII.

The final 2016 London game will take place in Week 8 on October 30 when the Bengals host the Redskins at Wembley.

"We are proud to be a part of the NFL's initiative to grow our game abroad, and we believe this game will be a source of pride for Cincinnati as well," says Bengals president MIKE BROWN. "It will provide a strong platform for our region's culture and recent progress."

"It's an historic event for the Washington Redskins, and it's historic for the National Football League," says Washington President BRUCE ALLEN. "There's going to be a lot of burgundy and gold in that stadium."

The Oakland Raiders host the Houston Texans at Estadio Azteca in Mexico City on Monday night, November 21, marking the first-ever Monday Night Football game to be played outside the United States.

"Expanding our International Series of regular-season games to Mexico marks an important step in our continued international growth," says Commissioner Goodell. "We have a tremendous, passionate fan base in Mexico and we know the atmosphere on game day will be outstanding." Both clubs are looking forward to the opportunity to play in primetime in Mexico City.

"The Raiders are honored to once again represent the National Football League in its International Series," says Raiders owner MARK DAVIS.

"The Raiders are truly a global brand and we look forward to visiting the loyal and passionate members of the Raider Nation in Mexico."

"We are excited the Houston Texans can represent the NFL on an international stage for the first time on Monday Night Football this fall," says Texans Chairman and CEO ROBERT MC NAIR. "This is a great opportunity to grow our brand on a global scale and we are looking forward to playing in front of a passionate crowd at historic Azteca Stadium."

The passion of the Mexican fans is consistent with the burgeoning U.S. Hispanic fan base. According to the Nielsen Company, average viewership for regular-season NFL games among Hispanics has risen 28 percent in the past five years and the addition of a regular-season game in Mexico will help to unite this extraordinary audience of NFL fans.

The International Series began on October 28, 2007 when the Giants defeated the Dolphins 13-10 at Wembley. Since its inception, participation in amateur football in the UK has risen by approximately 15 percent per year. The International Series to date has contributed to increasing NFL fan interest in the UK, with a current fan base of more than 13 million people, including more than three million avid fans, a 50 percent increase in the past three years.

What players and coaches have thought about playing in London through the years:

"I just want to thank the fans. It was an outstanding environment for our team. Our team felt it, and we greatly appreciate the fan base and how active they were throughout."

"There are 32 teams in the NFL. The Saints and Chargers were the third and fourth teams to represent the NFL in London. That speaks volumes and I am honored to have been there."

"I can't tell you how great of a week we had as a football team. Everybody was fantastic. They were so welcoming and accommodating to us. I think the spirit of the NFL is catching fire over here and in a real positive way. I think we have benefited a lot from it."

"The UK crowd is very knowledgeable of the game. They were into it. You can tell over the years from 2007 to now, they understand third down, punts, when to make noise for the home team. So the knowledge base of the UK has grown tremendously, and I think that happens because now you have more and more teams coming and showing the game and playing it the right way, where you have the stars playing and the interest in the game is there for four quarters."

"The people have been fantastic. Everyone's just been very genuine. And obviously being able to play at Wembley on the pitch was special. Something you'll always talk about and tell your kids. So, to come over here, I thought it was really as outstanding a week as I could have ever hoped for. I was really happy to see the fans and just everyone have the passion that they had."

"The stadium is awesome. It was really cool coming here for the first time just seeing the stadium. It's a really nice stadium and the crowd was great."

WR Golden Tate, Detroit Lions "You know what, I really enjoyed this entire week. I can't say enough great things about everyone who welcomed us into this country. Everyone was extremely nice. We really appreciate that. And we're happy that we were able to come over here and try to expand our game."

WR Brandon Marshall, New York Jets "The crowd was rowdy, they were loud and it was a fun environment. It was one of the best games as far as the environment goes that I ever played in."

"We appreciate the hospitality that the people in London gave us. It's been phenomenal all the way around. They were all tremendous. Most of all, our players had a good result from all of this. It's a long trip. It's a long way to go for a home game, but it was enjoyable."

Building off the tremendous success of the NFL International Series in the UK, the NFL will also return to Mexico for a regularseason game for the first time since the Arizona Cardinals hosted the San Francisco 49ers in 2005.