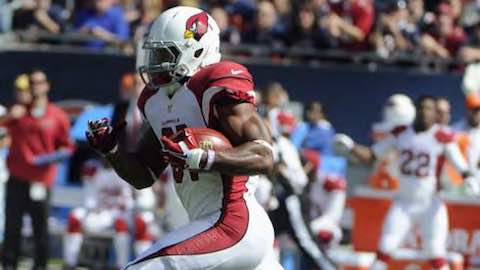 Last season featured many exciting plays in the return game. These exhilarating plays, made by some of the game's most dynamic playmakers, started early and kept coming.

"He just looks unstoppable out there," says Seahawks head coach PETE CARROLL about Lockett, who was selected to the Pro Bowl as a return specialist. "Those returns are just a bunch of guys working together to get it done. That's the biggest thing we talk about on special teams. Just making a difference to be able to get our offense in the best position possible."

Johnson and Pro Football Hall of Famer GALE SAYERS (1965) are the only rookies in NFL history with at least four rushing touchdowns (eight), four receiving touchdowns (four) and a kickoff-return touchdown.

"He's just a special player," says Cardinals quarterback CARSON PALMER about Johnson. "He covers so much ground with each stride and it's very deceiving. It doesn't look like he's as fast as he is. He's got a long and powerful stride that it almost looks effortless. He's got so much power behind each step."

In Week 1, became the fifth player in the past 20 years to score a touchdown on a punt return and a rush in the same game.

Recorded his fourth career punt-return touchdown in Week 7, tied for the most in franchise history.

[ Antonio Brown on the Receiving End ]

In Week 2, recorded a 108-yard kickoff-return touchdown, tied for the second-longest in NFL history.

In Week 13, scored on a 101-yard kickoff-return touchdown, the fourth of his career. Patterson has nine career kickoff returns of at least 50 yards, the most in Vikings history.