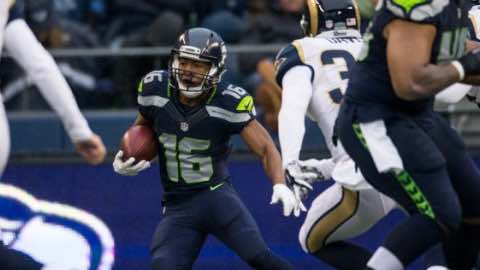 Seattle Seahawks wide receiver Tyler Lockett capped off his impressive rookie season by being selected to the Pro Bowl as a return specialist.

Lockett joined Pro Football Hall of Famer GALE SAYERS (1965) as the only rookies in NFL history to have at least five touchdown receptions (six), a kickoff-return touchdown and a punt-return touchdown.

"Tyler is a one-of-a-kind talent and a one-of-a-kind person," says Seattle Pro Bowl quarterback RUSSELL WILSON. "He's as good as it gets. He's so exciting with the ball in his hands."

"Tyler had a fantastic season," says Seahawks head coach PETE CARROLL. "He had a terrific season for us as a receiver as well as the effect he had as a returner. He's such a great competitor and a fantastic kid on our team."

"He's special," says Philadelphia Eagles Pro Bowl return specialist DARREN SPROLES about Lockett. "You can't defend him. He's trouble everywhere on the field. He's a player where you've always got to know where he's at."