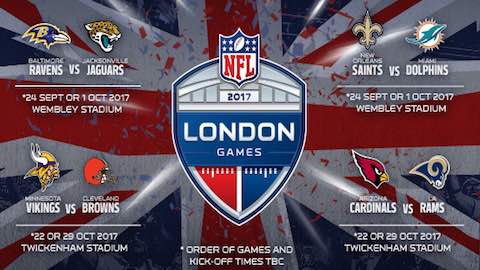 The NFL has released their International Series schedule for London in 2017. For the first time, the slate of games in London has been expanded to four games

The dates and times of each game will be finalized when the 2017 NFL schedule is released in the spring.

Four NFL games will take place in London in 2017. It marks the first time the NFL will play four games in the UK capital.

Game times and dates will be finalized in conjunction with the revealing of the full 2017 NFL schedule next spring.​

At the conclusion of the 2017 season, 26 teams will have played in London since the inception of the London Games Series in 2007. Since that time, the NFL has achieved accelerated growth in the UK. Sunday viewership of NFL games has more than doubled and the Super Bowl audience has increased more than 75 percent. This season, the NFL is on pace to reach a record number of unique TV viewers in the UK. The league also has developed new and stronger business partnerships and, according to internal research, has a UK fan base of more than 13 million, including close to four million avid fans.

Participation in amateur football in the UK has risen by approximately 15 percent per year since 2007, with the latest figures from Sport England showing that 40,000 people age 14 or older play regularly. American football is now an officially recognized sport in UK universities and schools.

The London Games Series began in 2007.