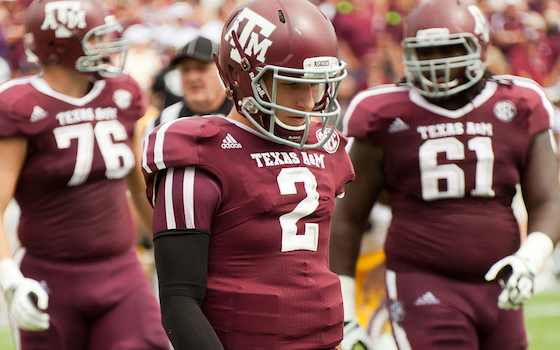 Unknown to many, James has already been mentoring Manziel for months. Earlier this week, the star quarterback signed with James' marketing company, LRMR.

LRMR is run by James' friend and business partner Maverick Carter, who has close ties with Nike and has negotiated numerous marketing deals for the basketball superstar in the past nine years.

James said he didn't know if the deal was official, adding he hopes to formalize a business alliance with Manziel.

In a recent interview, Manziel revealed he sought out James' advice when he was being investigated by the NCAA this summer for signing autographs for memorabilia brokers.

"We're happy we're able to be a friend of his and be able to help," James said. "He reached out to me when he was going through a lot of off-the-field things that I didn't really -- that I thought it was just overblown."

"He's not the only kid who went to a college frat party or the only college kid to have fun. But obviously he's Johnny Manziel, so it is blown out of proportion," he added.

James added that he routinely sent text messages to Manziel before and after Texas A&M games to offer encouragement to the quarterback.

Manziel recently spent time in Miami before he made his decision to enter the NFL draft and was seen sitting courtside at a Heat-Golden State Warriors game last week.

Billick: Can Manziel transition to NFL?