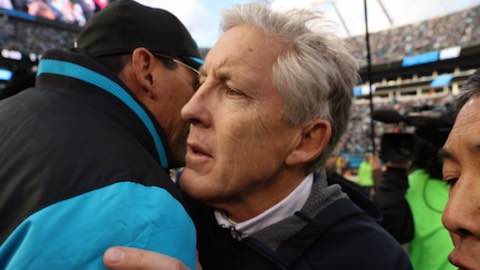 The Panthers and Seahawks -- teams with a vivid rivalry -- are more concerned this week with their own vulnerabilities than the caliber of the opponent.

When the NFL schedule came out in April, Seahawks fans drew a red circle around "Dec. 4 -- CAR." Since the Panthers booted the Seahawks from the playoffs with a half-dominant 31-24 triumph, following a 27-23 regular-season victory at the Clink, it can be fairly said that no team owned the Seahawks as Carolina did last year.

The playoff loss was partial payback for Seattle scuttling the Panthers' postseasons in 2005 and 2014, and helped develop the rivalry narrative -- the teams have met eight times since 2010 -- that despite an entire continent between the franchises, was welcomed after the San Francisco 49ers self-immolated.

But neither team is talking rivalry this week ahead of the 5:30 p.m. Sunday night national game. Both are so absorbed averting disaster that the identity of the next foe is of secondary importance.

The Panthers, in danger of missing the playoffs, are telling themselves that because five of the losses were by three points or less, they really are closer to playing like defending NFC champions than the record indicates.

Meanwhile, the Seahawks continue to tell themselves that Sunday's 14-5 loss in Tampa, the club's most dreary under-performance in the Russell Wilson era, was, as assistant coach Tom Cable put it, "A bad night at the ball game."

Fortunately, CB Richard Sherman came through to remind all that some embers remain from the playoff ouster. Asked whether an episode when Panthers QB Cam Newton, as part of a victory lap in the Charlotte stadium, grabbed a "12″ flag from a Seahawks fan in the grandstand, balled it up and and threw it away, Sherman agreed it went too far.

"Yeah, he probably did," he said. "I guess karma gets you. Doesn't look like they are going to the playoffs this year."

Perhaps more than karma, O-line injuries have been a bigger cause of the Carolina spiral, making some of the Seattle despair seem a trifle. There's also the reality of the Super Bowl hangover. The Panthers lost to the Broncos in February, then made the mistake of letting star CB Josh Norman go into free agency, and now are doing many little things wrong that went well a year ago.

"I think (the hangover has) a little bit to do with it," said Panthers coach Ron Rivera on a teleconference Wednesday. "The truth of the matter is if you win the first game, things can be different. Unfortunately we didn't, so we have to battle uphill.

"I tried to look up articles in terms of what (Seahawks coach Pete Carroll) has done to go back-to-back, just trying to get an understanding and feel for it. Unfortunately we just haven't had the luck. That's the hard pill to swallow, because last year we made our own luck."

Carroll was expansive on the managing of expectations that come with Super Bowl success.

"I don't think you ever are not dealing with the impact of the expectations, whatever they are," Carroll said, speaking generally and not specifically about the Panthers. "Expectations come at you from yourself, within your building, expectations that come from the outside, the media, all walks. It takes an on-going conversation to deal with that, so when the time comes, and the unanticipated occurrences start to knock at you, you can handle it.

"I think there's a real discipline to it. There's language, there's dialogue, there's expectations. It's how you practice and present it. I love this whole thing that we're in with the mentality to try to keep from being up and down, and being normal. Most teams go up and down a lot, we're trying to not be that style over a long haul."

Carroll reiterated an anecdote from the first game of his first (and only) season as head coach of the New York Jets. After beating the Bills in Buffalo, he returned to field to soak up the ambiance and noticed all the division and conference championship banners that were hung in the stadium.

"Even though they hadn't won Super Bowls, that was a symbol of (consistent) success," he said. "That was what you're really after: Teams that can come back year after year after year and maintain a high level of performance.

"That's why to win a Super Bowl, a national championship, that's cool, that's a great thing and it's fun. To me, that's not the ultimate. There's way more than that. It's about showing the ability to be consistent."

The Seahawks are in their fifth season of top-shelf contention.

At 7-3-1 they are, barring collapse, a good bet to return to the playoffs, particularly considering that they have the easiest remaining schedule among NFC playoff contenders, with no pending opponent having a winning record.

But if the Tampa outcome isn't sufficient inspiration to avoid cockiness, consider how Panthers stars Newton, RB Jonathan Stewart, TE Greg Olsen and WR Kelvin Benjamin have solved the defense like no other Seattle foe.

Take a look at the seven touchdown drives the Panthers put together in the two games last season against the NFL's best defense over the past four seasons:

Carolina's fourth TD in the playoff game was a 14-yard interception return by LB Luke Kuechly on one of Wilson's worst passes of the season.

The Panthers this season are hung over, hurt and unlucky. One thing they are not, is fearful of the Seahawks.