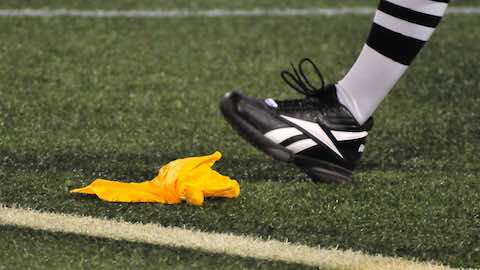 Rule changes are made each season to improve the game and make it safer. With player health and safety remaining a priority, here are the 2016 rules changes and points of emphasis

Rule changes are made each season to improve the game and make it safer. Recent rules changes and points of emphasis focused on player safety have resulted in defenders adjusting their target zone and using the proper tackling technique.

Fines For Hits On Defenseless Players

With player health and safety remaining a priority, here are the 2016 rules changes and points of emphasis

A player that is penalized twice in the same game for certain types of unsportsmanlike conduct fouls will be automatically disqualified. These types of fouls include:

- Use of abusive or threatening language toward an opponent

- Any act that constitutes taunting

The horse collar rule has been expanded for this season. Prior to this change, it was illegal to grab the inside collar of the back or the side of the shoulder pad or jersey and pull the runner toward the ground. Now it will also be illegal to grab the back or side of the jersey at the name plate or above and pull the runner toward the ground. The runner does not have to be pulled all the way to the ground. If his knees are buckled by the action, it is a foul.

For the 2016 season, after a touchback resulting from a kickoff or safety kick, the ball will be placed at the receiving team's 25-yard line.

2015 saw an increase in both fouls and fines for low hits on passers. The quarterback in the pocket in a passing posture is protected from forcible contact to the knee area or below. Low hits on passers will result in a 15-yard penalty for roughing the passer as well as potential discipline. Once the quarterback tucks the ball and takes a running posture or moves outside the pocket and throws on the run, he no longer receives protection from hits to the knee area or below.

Rules regarding sliding runners will be emphasized in 2016. A runner gains maximum protection when he slides feet first and before defensive contact is imminent. A runner that slides in this manner is treated like a player on the ground and may not be unnecessarily contacted to any part of his body. If a runner begins his slide after defensive contact is imminent then he loses protection from hits to the body, but the defender must still avoid forcible contact to the head or neck area. If a runner slides sideways or dives head first, he receives no special protection and may be hit anywhere until he is on the ground.

The rule regarding crown of the helmet hits on runners has been clarified for 2016. A defender may not lower his head and make forcible contact with the crown of his helmet to any part of a runner's body. This rule applies outside the tackle box and a foul will be called regardless of the path the defender takes toward the runner.

Pre-snap movement on the offensive line will be a point of emphasis for the upcoming season as game officials will pay particular attention to movement of the football prior to the snap. Adjusting the football as the center gets into his stance is legal, but once the line is set, any abrupt or significant movement of the ball will result in a five-yard penalty for a false start. In addition, any quick or abrupt movement that is not part of the snap will also result in a false start. However, if the movement is smooth and deliberate, it will be deemed legal. Game officials will work with centers and long snappers during training camp and before each game to establish acceptable standards.

The last point of emphasis will involve blindside blocks on kickoff and punt returns. Any time a blocker is moving in the direction of his own end line, he cannot block his opponent in the head or neck area. These blocks are dangerous and will lead to a 15-yard penalty and potential discipline.