NFL 2016: NFL Quarterbacks Of The Future 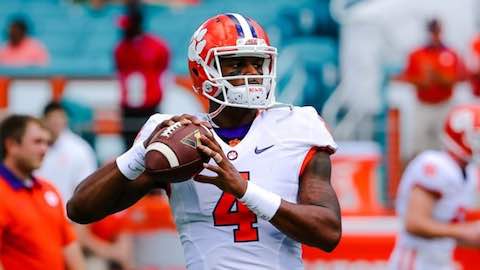 NFL 2016: NFL Quarterbacks Of The Future

The success of a team often hinges on the production at the quarterback position.

Gil Brandt, who oversaw the Dallas Cowboys' personnel department for 29 years and currently shares his gridiron knowledge as a senior analyst for NFL.com, sees plenty of quarterback talent coming up the pike.

Following are Brandt's choices for the top QBs in college today (listed alphabetically):

"Last season was Beathard's first as the starter and he threw 17 touchdowns, leading Iowa to an undefeated regular season. He is very smart with good leadership qualities and has good arm strength."

"Luke threw for 38 touchdowns last season and had a 69.4 completion percentage. He had three games with at least 497 passing yards against good teams -- very accurate and well coached by Mike Leach."

"He is a senior, who had a 65.2 completion percentage last season, and is very athletic with excellent arm strength and accuracy. His uncle, Blair Kiel, played seven years in the NFL."

"Entering his third year as a starter, Mahomes is probably as athletic as any of the quarterbacks we'll see this year. He has a strong arm and threw for 598 yards against Baylor. His father, Pat, pitched 11 years in Major League Baseball."

"Mayfield started 2013 as a walk-on at Texas Tech and transferred to Oklahoma after the season. Last year, he threw for 36 touchdowns and completed 68 percent of his passes. He is a Fran Tarkenton-type of quarterback because he moves around well and makes things happen."

"Watson is the real deal. He has excellent running ability with great arm strength and accuracy. He led Clemson to the National Championship game and was a Heisman finalist last season."

The talent pool will only deepen with these five high school seniors, rated in order of talent by CBS Sports Network recruiting expert TOM LEMMING:

"He reminds me of Brett Favre. He's a gun slinger and he throws a 90+ mph baseball pitch. He's a great pocket passer and a pro-style quarterback. He's committed to the University of Georgia."

"Dylan was the player of the year in Colorado. He's another pro-style quarterback who is very tall and comes from an athletic family. His brother is Stanford running back and Heisman hopeful Christian McCaffrey."

"He is very talented. He had a great year and a great sophomore year. He's got all of the tools and is committed to Clemson."

"The kind of kid you're looking for in college now, someone who can run and throw. He's got a lot of confidence. Overall, he is a great athlete -- great basketball player and track star."

"He led Bishop Gorman to the National Championship the past two years. He's a Russell Wilson-type quarterback, who can run and throw. He throws exceptionally well on the run."