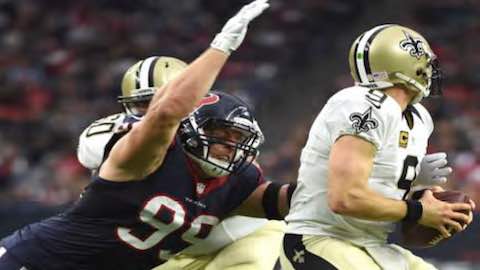 Houston Texans defensive end J.J. Watt -- NFL Defensive Player of the Year -- persevered thru a series of injuries last season including a broken hand, herniated disk and torn muscles. During the offseason, J.J. underwent surgery to fix the herniated disk and could miss a game or two at the start of the season. Despite the setbacks, J.J. Watt is expected to be 100% this season

Houston Texans defensive end J.J. WATT, who was named the NFL Defensive Player of the Year for the second consecutive season and third time in four years (2012, 2014-15), was nothing short of dominant in 2015.

Watt joins Pro Football Hall of Famer LAWRENCE TAYLOR (1981-82, 1986) as the only players to be named NFL Defensive Player of the Year three times.

Watt, a four-time Pro Bowl selection, led the league with 17.5 sacks and joined Pro Football Hall of Famer Reggie White as the only players with at least 15 sacks in three of their first five seasons since the statistic became official in 1982.

"I can't compare J.J. to anybody because he's so long and he's so explosive," says Texans head coach BILL O'BRIEN. "The thing that sets him apart is that he has a relentless way of playing. He disrupts the game in a lot of different ways."

Since being selected in the first round by Houston in the 2011 NFL Draft, Watt leads all players with 74.5 sacks, which is the second-most of any player in his first four seasons since sacks became an official statistic in 1982, trailing only White (81).

Watt is the only NFL player with multiple 20-sacks seasons since 1982.

"He combines elite-level strength with elite-level quickness and an elite-level first move with elite-level counter moves," says ESPN analyst and former NFL guard MARK SCHLERETH. "When you're playing against a guy like that, he's got so many things he can get you with that it makes it incredibly difficult to prepare and plan for. You look at it and, quite frankly, he's like this perfect football player."

NFL Players with at Least 20 sacks in a Season