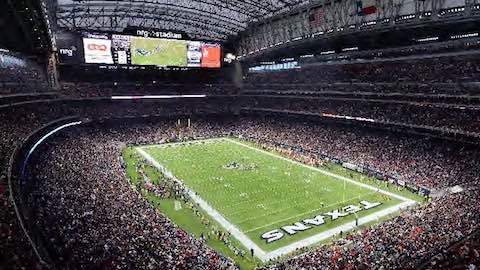 "It's very hard to get a Super Bowl because there are a lot of cities that want to have it and there's a lot of competition," says Texans Chairman and CEO ROBERT MC NAIR. "I felt fortunate that we were able to get the votes to win. There are limited opportunities to get a Super Bowl, so for us to do this and to have it for a second time is really important and speaks well of our city."

The game will be the first in Houston since Super Bowl XXXVIII when the New England Patriots defeated the Carolina Panthers 32-29 on February 1, 2004.

The NFL will return to branding the Super Bowl with Roman numerals after using the Arabic numeral "50" for last year's game.

Before the Super Bowl, fans can attend "Super Bowl LIVE," a free 10-day festival featuring food, games and attraction in the scenic Discovery Green Park in downtown Houston. The event will be roughly twice the size of San Francisco's Super Bowl City.

"Super Bowl LIVE is an opportunity for everyone in Houston, as well as from around the state, to enjoy a great Super Bowl experience and be a part of the excitement," says Host Committee President and CEO SALLIE SARGENT.

Super Bowl LIVE will open on January 27, giving local residents the opportunity to experience the festival before out-of-town guests arrive.

Aiming to impact the community long after Super Bowl LI, the Houston Super Bowl Host Committee has partnered with the Greater Houston Community Foundation to form Touchdown Houston, a charitable giving program that will donate $4 million in grants to nonprofit organizations in the Houston area with a focus on three life-changing avenues of giving: Education, Health & Wellness, and Community Enhancement.