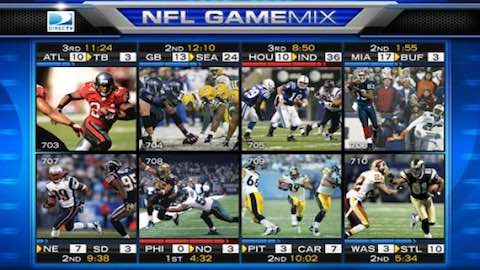 NFL games everywhere: How much is too much? (DirecTV)

The top story around the NFL is the concern about falling TV ratings. They are down on Sundays in early slots and afternoon slots, as well as feature games on Sunday, Monday and Thursday nights.

The NFL’s TV ratings are in a tailspin this year, startling owners and administrators. Reasons are numerous, but there is one reason the NFL doesn’t like to talk about — over-saturation.

Two points before we go further:

First, NFL games still dominate their time slots, and while viewer numbers are down, the percentage of people watching games when the NFL is on shows pro football is still a broadcast behemoth.

Second, Seahawks fans can be pardoned for shaking their heads in bewilderment.

Seahawks football is still a winner in Seattle ratings-wise, and will remain so as long as the team stays good. But we're talking national numbers here. Even if we talked local, you don't have to go too far back to find a time when the Seahawks were average and their TV numbers reflected that fact (good, but not as robust as now).

Declining ratings has everyone in Commissioner Roger Goodell's administrative army sitting at their desks at full attention. The NFL isn’t a pile of leaves that will blow away in a windstorm, but given the cash involved, an 11 percent decline is a substantial audience loss.

Various reasons are being offered. The presidential election, like it or not, is the kind of gross public spectacle easy to condemn but hard to look away from. Ratings for the debates prove that.

There's also the quantifiable rise of “cable cutters,” former cable TV subscribers who decided that the growing mass of on-demand, streaming entertainment is far better than appointment TV via cable or satellite.

Some analysts say athlete activism regarding the deaths of African Americans from police shootings is a a turn-off to some in the audience.

There's no one answer that would explain the kind of drop (11 percent across the board and as high as 40 percent in younger demographics). But let's add three more reasons.

Once upon a time (about a decade ago), the NFL had three weekly TV windows: Two Sunday (early and late afternoon) and one Monday night. The league added a Sunday night window.

They also added Sunday morning windows this year for a record four games aired from London. That number is expected to rise. In a little more than a decade, the league has doubled the amount of national TV windows. Then there’s the NFL Network.

This is classic broadcast management thinking. If three is good, six is better. But in many cases (news magazine shows, reality TV, 24-hour news networks) over-saturation leads to viewer erosion.

There's simply too much NFL everywhere. TV networks affiliated with the league have year-round daily shows that grind every detail into sand. Same thing happens on sports talk radio. The NFL takes up a huge percentage of the real estate in dwindling print media.

The cumulative effect can lead to information overload, which might lead some fans to conclude that if the NFL is available 24/7 on multiple platforms, then nothing, including games, is must-see. Missing a game becomes akin to missing a bus. Another one will show up soon enough.

It's only a slight exaggeration to state that everyone is playing fantasy football these days. It's almost quaint to remember that until about a decade ago, the NFL ignored fantasy football. Now, there are several league-sanctioned TV shows dedicated to fantasy. The league's own website (as well as dozens of other sites) has a fantasy football game.

There's little question that the huge growth of fantasy football has changed how many people watch. More fans (the majority?) now are concerned less with which team wins and more with which player scored, how he scored, and the length of the touchdown or field goal. In no way is this meant as criticism, but the impact fantasy has had on viewing habits is indisputable.

Nothing underscores that fact more than the invention of the NFL's own Red Zone channel, which is dizzying to watch as viewers are whipped around from stadium to stadium to see every score as it happens. Watching Red Zone feels like being on the old carnival ride, "The Scrambler." The view changes so relentlessly that's it's tough for the brain to process.

There's so much information about NFL games available through personal electronic devices that there's simply no reason to stay tethered to a TV set. Where fantasy leagues once had to wait until Monday's newspaper to tally up scoring plays from Sunday games, fans now have access to every NFL score in real time. Whether you're a fantasy player or just a fan of a team or the game, it's easy to set up alerts via phone so you feel as if you're never missing anything. Since there's several hours of post-game highlight shows available on several different networks, you aren't.

Cuban's point from two years ago looks good now. But time will tell if this is the start of a drastic drop in broadcast popularity — a slaughtering of the hog, as Cuban would have it — or simply a natural adjustment. Because fixing the ratings shouldn't be the NFL's goal.

The league bosses need to accept the fact that fans consume football differently than they did a generation ago. That's the real reason ratings are falling.