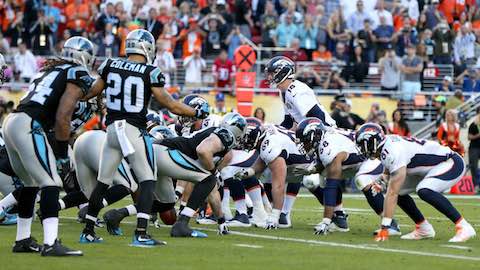 The NFL 2016 season begins with the NFL's annual primetime kickoff game. The opener features the Super Bowl champion Denver Broncos hosting the Carolina Panthers in a rematch of Super Bowl 50.

It's time to get "Back to Football!"

The NFL 2016 season begins with the NFL's annual primetime kickoff game. The opener on Thursday, September 8 on NBC (8:30 PM ET) will feature the Super Bowl champion Denver Broncos hosting the Carolina Panthers in a rematch of Super Bowl 50. The game marks the first Super Bowl rematch played on Kickoff Weekend since 1970 (Kansas City vs. Minnesota).

Since 1978 when the NFL went to the 16-game schedule, and excluding the abbreviated season of 1982, teams that are victorious in their season openers are more than twice as likely to reach the playoffs than losers of an opening game:

Note: There are a different number of winning and losing teams in season opening games due to the fact the NFL had 31 teams in each season from 1999 to 2001, which creates an odd number for the total number of results.

Kickoff Weekend begins on Thursday, September 8 in primetime on NBC when the defending-champion Denver Broncos host the Carolina Panthers in a Super Bowl 50 rematch. It marks the first Super Bowl rematch played on Kickoff Weekend since 1970 (Kansas City-Minnesota).

Some NFL teams have excelled in their season openers. Here is a sampling of notable active NFL Kickoff streaks:

The Super Bowl 50 champion DENVER BRONCOS, who start the season at home against Carolina, have posted a 42-13-1 (.764) record in home openers, the top mark in the NFL. Denver has won 22 of its past 25 home openers.

The NFC champion CAROLINA PANTHERS start the season on the road at Denver on Thursday night of Kickoff Weekend having won their past two openers on the road, tied for the second-longest active streak in the league.

The AFC East champion NEW ENGLAND PATRIOTS, who travel to Arizona on Sunday Night Football, have a 16-4 record on the road against NFC teams over the past 10 seasons. The Patriots have the fifth-most Kickoff Weekend wins among AFC teams (31).

The AFC South champion HOUSTON TEXANS, who open the season hosting Chicago, have won five of their past six home openers.

The NFC East champion WASHINGTON REDSKINS and SAN FRANCISCO 49ERS start the season at home against Pittsburgh and Los Angeles, respectively, during a Monday Night Football doubleheader. Washington has 48 wins in home openers -- the fifth-most amongst NFC teams -- while San Francisco has won 14 of its past 20 home openers.

The GREEN BAY PACKERS, who travel to Jacksonville on Kickoff Weekend, hold the record for the most wins in road openers (54) and the second-best winning percentage in openers on the road (.581, 54-39-2).

The ATLANTA FALCONS, who host Tampa Bay to open the 2016 campaign, have won eight consecutive home openers, the longest active streak in the NFL

The SEATTLE SEAHAWKS, who host Miami on Kickoff Weekend, have won seven consecutive home openers, the second-longest streak in the league

The CHICAGO BEARS (65-27-4), who host Philadelphia in Week 2 on Monday Night Football, have a .707 winning percentage in home openers, the second-best mark in the NFL

The DALLAS COWBOYS begin the year by hosting the New York Giants with a 38-17-1 (.691) record in openers at home, the fourth-best winning percentage in NFL history.

New England's BILL BELICHICK is 14-7 (.667) on Kickoff Weekend and his 14 wins are the most among active head coaches

Belichick and Los Angeles' JEFF FISHER (12-8; .600) are the only active head coaches who have won at least 10 Kickoff Weekend games and own an opening weekend winning percentage above .500

TODD BOWLES (1-0) of the Jets, HUE JACKSON (1-0) of Cleveland and DAN QUINN (1-0) of the Falcons are the only active head coaches with perfect records on Kickoff Weekend