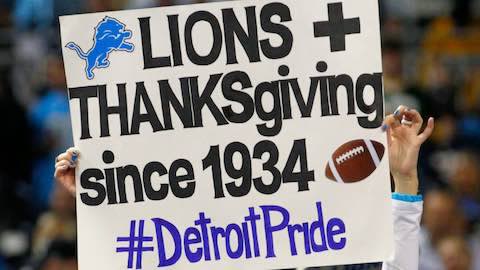 The relationship between Detroit and Thanksgiving dates back to 1934 when owner G.A. Richards scheduled a holiday contest between his first-year Lions and the Chicago Bears. Some 80 years later, Lions fans have transformed this annual holiday event into the single greatest tradition in the history of American professional team sports

It was, legend says, a typically colorful, probably chilly, November day in 1622 that Pilgrims and Native Americans celebrated the new world's bounty with a sumptuous feast.

They sat together at Plymouth Plantation (they spelled it Plimouth) in Massachusetts, gave thanks for the goodness set before them, then dined on pumpkin pie, sweet potatoes, maize, cranberry sauce, turkey and who knows what else.

Actually, fish was just as predominant a staple. And history books say pumpkin pie really debuted a year later. But regardless of the accuracy of the details, that's how Thanksgiving Day is seen by Americans -- except Detroiters.

They may have most of the same images as everyone else, but with a new twist that began in 1934.

That's when Detroiters and their outstate Michigan compatriots found themselves at the dawn of an unplanned behavior modifi cation, courtesy of George A. "Dick" Richards, owner of the city's new entry in the National Football League: The Detroit Lions.

Four generations of Detroiters have been a proud part of the American celebration of Thanksgiving. The relationship between Detroit and Thanksgiving dates back to 1934 when owner G.A. Richards scheduled a holiday contest between his first-year Lions and the Chicago Bears.

Some 80 years later, fans throughout the State of Michigan have transformed an annual holiday event into the single greatest tradition in the history of American professional team sports. Indeed, if football is America's passion, Thanksgiving football is Detroit's passion.

The game was the brainchild of Richards, the first owner of the Detroit Lions. Richards had purchased the team in 1934 and moved the club from Portsmouth, Ohio to the Motor City. The Lions were the new kids in town and had taken a backseat to the baseball Tigers. Despite the fact the Lions had lost only one game prior to Thanksgiving in 1934, the season's largest crowd had been just 15,000.

The opponent in 1934 was the undefeated, defending World Champion Chicago Bears. The game would determine the champion of the Western Division. Richards had convinced the NBC Radio Network to carry the game coast-to-coast (94 stations) and additionally, an estimated 26,000 fans jammed into the University of Detroit Stadium while thousands more disappointed fans were turned away.

The game was the NFL's first national broadcast.

In 2009, the Lions Thanksgiving Day game against Green Bay marked the NFL's 75th anniversary of the first NFL national game broadcast. Graham McNamee was the announcer for NBC Radio for that historic game in 1934.

Despite two Ace Gutowsky touchdowns, the Bears won the inaugural game 19-16, but a classic was born. Since 1934, 74 games have been played with the Lions holding a 35-38-2 (.480) record in the series. And each game, in its own way, continues to bring back memories of Thanksgiving, not only to Lions fans, but to football fans across the nation.

The series began November 29, 1934 when Detroit played host to the Chicago Bears. In the first Thanksgiving Day game, the Lions were defeated by the Bears 19-16.

A total of 76 games have been played with the Lions owning a 36-38-2 record in the annual holiday classic.

Detroit has won on Thanksgiving Day in each of the past three seasons, marking the team's longest streak in the holiday classic since winning four-straight from 1997-2000.

Eleven times in the series has a game been decided by three points or less, with the Lions' record standing at 4-5-2 in those meetings.

Three Thanksgiving Day games have gone into overtime. The first came in 1980 when the Bears' David Williams returned the opening kickoff of OT for a 95-yard touchdown. At the time, the game marked the shortest overtime game in NFL history (21 seconds). The second overtime game occurred in 1998 when the Lions defeated the Steelers 19-16 on a 42- yard Jason Hanson field goal in a game that will be remembered for the controversial coin toss before overtime began. The third occurred against the Houston Texans in 2012 in a game categorized by back-and-forth possessions and two missed field goals from each side, with Houston K Shayne Graham pulling out a 32-yarder for the win.

NFL Teams with the Most Thanksgiving Game Appearances

Most Points Scored on Thanksgiving