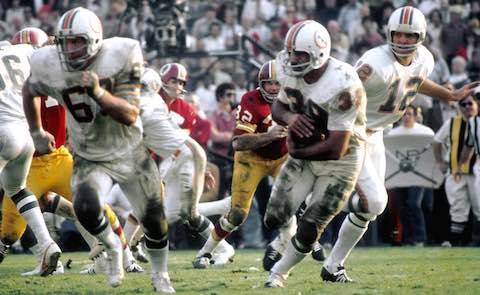 It is fitting that the only team to achieve perfection in NFL history has a keepsake from that special season. The 1972 MIAMI Dolphins' championship ring features one large diamond to represent their Super Bowl VII victory surrounded by 16 smaller diamonds -- symbolizing the 16 victories it took to get there. In addition, one side of the ring is inscribed "Perfect Season" in honor of the club's unprecedented 17-0 championship season.

"That season is special because nobody has ever done it," said the team's Pro Football Hall of Fame quarterback BOB GRIESE, of the Dolphins' "Perfect Season," whose 40th anniversary will be celebrated this year.

"It was the ultimate victory," said DON SHULA, the Dolphins' head coach from 1970-95, the winningest coach in NFL history (347 victories) and a member of the Pro Football Hall of Fame. "It was so special because it was my first Super Bowl win and to have it come with a team that accomplished what that team accomplished made it all the more memorable."

The 1972 season began well with the Dolphins winning their first four games, including a close, hard-fought battle against the Minnesota Vikings in week three.

But the road to the Super Bowl was not always smooth.

In Week Five at home against the San Diego Chargers, starting quarterback Bob Griese went down with a broken ankle and was out for the season. Enter veteran quarterback Earl Morrall, who fit so perfectly into the offense that the Dolphins didn't miss a beat. They defeated the Chargers 24-10 and then reeled off nine more consecutive wins to finish with the first 14-0 regular season record in the history of the NFL. The 38-year-old Morrall started the next 11 games for the Dolphins.

"When I was coaching the Colts in 1968, Earl came on when JOHNNY UNITAS got hurt and did a great job to get us to the Super Bowl," Shula recalled. "When he became available, I didn't hesitate to bring him down to Miami as insurance for Griese. Earl just stepped in and gave us great confidence in the games that he started."

While Morrall's leadership was essential, it was the Dolphins' ground game which carried the offensive load. LARRY CSONKA (1,117) and MERCURY MORRIS (1,000) comprised the first teammate duo in NFL history to each reach the 1,000-yard rushing mark in the same season. The success of the running game epitomized the team's selflessness. 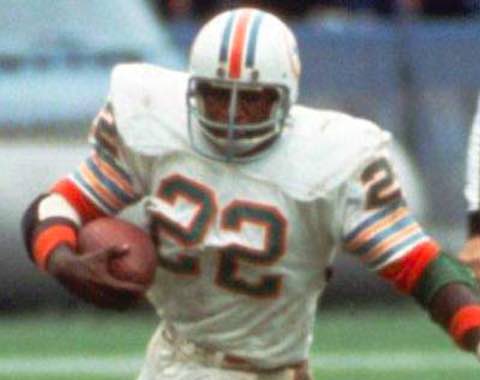 After beating the Cleveland Browns in the division championship, the 15-0 Dolphins had to go on the road to face the 12-3 Pittsburgh Steelers at Three Rivers Stadium. This was because home field advantage in 1972 rotated by division and not by record. At halftime of a close game, Shula made the decision to replace Morrall with a healthy Bob Griese. Aided by Larry Seiple's 37-yard first down run from a punt formation, the Dolphins went on to beat the Steelers 21-17 to go 16-0 and win another trip to the Super Bowl.

Super Bowl VII matched the unbeaten Miami Dolphins -- a team that led the entire NFL in offense and defense, while boasting the league's first ever pair of 1,000 yard runners in the same backfield -- against the 13-3 Washington Redskins. Surprisingly, the Redskins were favored. Miami won 14-7, in a game that was not as close as the score would suggest. In doing so, they became the first and only undefeated champions in NFL history. Safety Jake Scott was the Super Bowl VII MVP with two interceptions, but many on the team also had a great game. Manny Fernandez had a terrific game with 17 tackles, 11 of them solo, because the Redskins made the mistake of trying to block him one-on-one for most of the game.

"We were a very unselfish team," said former Dolphins defensive tackle MANNY FERNANDEZ. "A lot of players sacrificed their personal ambitions for the good of the team. PAUL WARFIELD, for example, was playing for a team that threw him the ball three times per game. In today's game, he would be the 'go-to guy' with 10 passes a week going to him. He was more than willing to take that backseat to become a blocker in the running game."

Warfield, the Hall of Fame receiver who led the '72 Dolphins with 606 receiving yards -- a total lower than in any of his previous six seasons -- agreed with Fernandez' assessment. "The success of the team was paramount," he said. "Everyone's focus was to win and win at the highest level."

That desire to reach the highest level was fueled by failure one year earlier. "The drive for the whole season was the Super Bowl VI loss to Dallas," said Griese. "There was nothing that was going to stop us from going to the Super Bowl and winning it."

"Our 17-0 happened because the Miami Dolphins football team had something to prove," Warfield added. "We were humiliated in Super Bowl VI and when we came to training camp in 1972, our objective was to get back to the Super Bowl and to reinforce in our own minds -- as well as those of the fans across the country -- that we were a better football team."

"It was a very well-balanced team," said Fernandez, who posted 10 tackles and one sack in the Super Bowl while playing for the team's unsung defense, aptly called the "No-Name" defense.

"The 'No-Name' defense took pride in the 11-man concept," said Shula of a unit which allowed an NFL season-low 171 points.

The 1972 Miami Dolphins played the AFC Championship Game on the road at Three Rivers Stadium in Pittsburgh due to a rotating playoff site system. "We were a team that had more wins than anyone else and we had to take our show on the road," said Warfield.

"The game I remember most," recalled Shula, "is the (October 1) Minnesota game." The Dolphins trailed the Vikings 14-6 in the fourth quarter. "We needed 10 points to win it," Shula said. "I chose to go for the field goal first and GARO YEPREMIAN kicked a 51-yarder. Then we had to get the ball back, which we did, and we drove down for the touchdown. We needed those points and we got them."

Other Teams Occasionally Cited as Undefeated

1948
Cleveland Browns, 14 -- 0, as members of All-America Football Conference prior to joining NFL

Teams Since 1961 Which Have Come Close