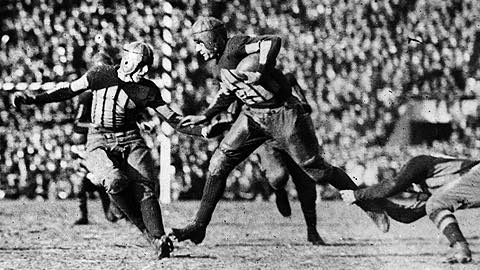 It's hard to imagine today, but in 1925 the NFL had difficulty attracting fans and desperately needed something to capture the public's attention. The NFL got exactly what it wished for that year when the Chicago Bears signed famed collegian Harold 'Red' Grange, forever changing the league's fortunes and putting professional football on the map for good

The "Galloping Ghost," as Grange was known, was already an iconic star from his days as an All-American halfback at the University of Illinois.

When Grange made his debut with the Bears on Thanksgiving Day, 1925 against the cross-town rival Cardinals, a standing-room crowd of 36,600 -- the largest in pro football history at the time -- packed Cubs Park (now known as Wrigley Field) to get a glimpse of the young talent.

From that 0-0 game in which Grange played offense, defense and special teams for the Bears, the club realized they had something special on their hands that fans wanted to see.

Over the next several months, the Bears toured the country barnstorming, showcasing Grange to countless fans who flocked to see him play. In the end, Grange completed a 10,000-mile, 19-game, 66-day odyssey across the U.S. (including eight games in 12 days). The journey brought the still-young National Football League its first national recognition.

Undoubtedly many fans were enthralled by Grange's dazzling exploits, cultivating legions of new fans. For the first time in the league's infancy, it began to hold a place in national prominence.

In addition to the fans he brought to the stadiums, Grange's presence was also transformative because his extraordinary play was directly responsible for the decision by respected newspapers and sportswriters at the time to cover professional football. When reporters in Chicago, New York, and Philadelphia began to cover Grange's games, many readers across the country were exposed to the NFL for the first time.

"No one will ever attempt anything like this again," said Grange after the tour. He was right.

Grange, who would go on to a Pro Football Hall of Fame career with the Bears, earned a staggering sum of $75,000 for the tour. And the gratitude of a young NFL.