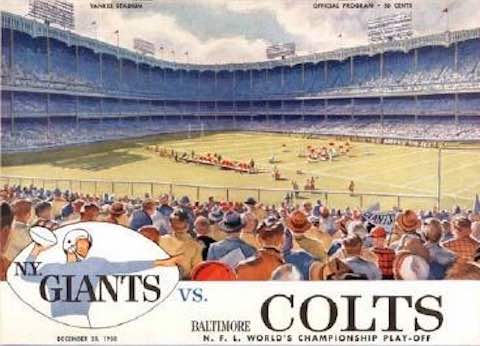 The Greatest NFL Game Ever Played

On December 28, 1958, what would become known as "The Greatest Game every Played" took place --- the 1958 NFL Championship Game between the Baltimore Colts and New York Giants at Yankee Stadium in New York City.

And when Colts fullback Alan Ameche burst through a hole for a one-yard touchdown with 6:45 left in overtime -- at 4:51 on a foggy, drizzly day -- he took the National Football League with him into a new era.

The NFL would never be the same. America had discovered it.

It may be hard for today's young sports fan to believe, but 55 years ago, the sports scene -- and the NFL -- was vastly different. There was no SportsCenter, no internet, no radio talk shows, no fantasy football. Baseball was the No. 1 sport with fans.

Then came this late-winter nationally televised NFL epic between larger-than-life teams featuring names like "Huff" and "Katcavage" and "Unitas" in a game that surged back and forth into the first sudden-death overtime in NFL title game history. "PETE ROZELLE (NFL commissioner from 1960-89) always told me that the reason pro football took off was because that happened just at that time, in that season, and it happened in New York," said late New York Giants owner WELLINGTON MARA.

It was the fourth time the teams had played each other that year. The Colts won both preseason meetings and the Giants were victorious in the regular season. New York tied with the Browns in the Eastern Division with a 9-3 record, forcing a playoff against Cleveland. The Giants won, 10-0. Baltimore won the Western Division, also with a 9-3 record.

It was to be a classic confrontation of offense vs. defense. The Colts led the NFL in scoring with 381 points. They were led by 25-year-old quarterback JOHNNY UNITAS (left), signed two years before out of the Pittsburgh sandlots where he had been making $25 a game with the Bloomfield Rams. The Giants, glamorizing defense for the first time in NFL history, surrendered the league's fewest points with 183.

For a matchup featuring such dominant teams, things started slowly. The Giants were the first to score, on a 36- yard field goal by PAT SUMMERALL with two minutes left in the first quarter. By halftime, the Colts had a 14-3 lead, and it looked like their high-powered offense would only add to that total in the second half.

It certainly seemed that way as the half began. On their second series, the Colts drove from their 41-yard line to the Giants' three. A score here would give them a commanding lead. It was time for New York's vaunted defense to stiffen. They did exactly that. Three rushes gained the Colts two yards. It was now fourth-and-goal at the one.

"I decided that another touchdown would kill them right then and there," said Baltimore head coach WEEB EWBANK. "I told Johnny to go for it."

Unitas took the snap, pitched to Ameche, who faked a pass and then took off, only to be stopped cold by JIM KATCAVAGE, DICK MODZELEWSKI and SAM HUFF. Four-yard loss. Giants ball. The momentum had swung. The Giants marched 95 yards on the next series, and 81 yards on the next, with both drives resulting in touchdowns. Now they were ahead, 17-14, one minute into the fourth quarter. It was their turn to try to bury the opposition. The Colts drove to the Giants' 39. A BERT RECHICHAR 46-yard field-goal attempt was short. On the Colts' next series, they were forced to punt. Time was winding down.

"At that point," said Giants halfback ALEX WEBSTER, "we just had to keep the ball, run out the clock, and they'd never get another chance. We were so hot … everything was working well … it sure looked like our game."

The Giants moved from the 19-yard line to their 40, using up the clock on four running plays and a completed pass. On third-and-four, FRANK GIFFORD (right) took a handoff from quarterback CHARLIE CONERLY on a power sweep. He was met at the line by Marchetti and linebacker DON SHINNICK, who were almost immediately joined by 288-pound tackle GENE "BIG DADDY" LIPSCOMB. The force and weight of Lipscomb's arrival snapped Marchetti's right leg above the ankle.

To this day, Gifford thinks he made the first down.

"I made the first down," he says. "But Marchetti broke his leg, and he was screaming like a wounded panther. There was a lot of confusion. A lot of time passed by while they carried Marchetti off the field. When they spotted the ball, it was placed short of the first-down marker."

Go for it? Or punt? The Giants had the best punter in the business, DON CHANDLER. Giants head coach JIM LEE HOWELL (left) waved him in. "Chandler could kick the ball all the way," Howell said. "We thought we could stop them."

Chandler punted 43 yards to the Colts' 14, where CARL TASEFF fair-caught it.

"When we got in the huddle," said wide receiver RAYMOND BERRY, "I looked down the field and the goal posts looked like they were in Baltimore."

The Colts were now at the New York 13-yard line with 19 seconds left, but no timeouts available. Kicker STEVE MYHRA raced onto the field.

"I told myself I better not miss it," he said, "or it would be a long, cold winter back on the farm in North Dakota." Myhra's 20-yard field goal with seven seconds left created the first sudden-death overtime in NFL championship game history.

Unitas called tails on the coin toss. It came up heads. The Giants elected to receive, but gained only four yards before Chandler punted to Taseff. The next 13 plays confirmed the "ice-water-in-his-veins" legend of Johnny Unitas.

"Johnny told us in the huddle before we began that drive that we were going to take the ball right down and score," said Ameche. "And we all believed him."

Unitas moved the Colts 80 yards in those 13 plays. He put Baltimore into position after completing a 12-yard pass to Berry to set up first-and-goal at New York's eight-yard line.

A fan raced onto the field. The officials called time out. Unitas went over to talk to Ewbank.

"Keep it on the ground," Ewbank said. "We don't want an interception here. We can go for the field goal if running plays don't work." 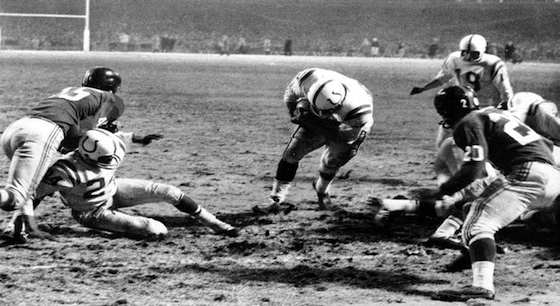 Unitas followed instructions … initially. He handed off to Ameche for a one-yard gain off right tackle. Then he stunned everybody -- especially Ewbank -- by fading back and floating a six-yard pass along the right sideline to wide receiver JIM MUTSCHELLER. That set up third-and-goal at the one-yard line. Unitas called "16 power," a play designed to send Ameche through the right side of the line. Mutscheller and Moore leveled Giants linebacker CLIFF LIVINGSTON and safety EMLEN TUNNELL. Colts tackle GEORGE PREAS and guard ALEX SANDUSKY cleared out a hole that the 220-pound Ameche roared through, falling from his momentum after crossing the goal line for the game-winning touchdown.

It was 4:51 in the afternoon. The NFL had arrived

"I'm sure there have been many games just as exciting. But there were some other forces at work for that game. The way everything blended together -- the television, where the game was played, and the fact that pro football was ripe for expansion -- was the key. I consider it to be the greatest game because of its impact."

"Everything came together for the greatness of pro football. New York is the heartbeat of the media, including Madison Avenue. Those ad men were young guys -- young and sharp -- and suddenly they happened to tie into pro football, just when television was hitting its peak."

"It was dusk. The lights were on. Banners were flying. We were world champions and I was in such awe. I walked off the field and stopped three different times. I didn't want to leave." Reactions from national media:

"Never has there been a game like this one."

"All of a sudden, the networks woke up and saw that they had to have football. The game was a defining moment in the growth of pro football."

"(The game) was easily the most dramatic, most exciting encounter witnessed on the pro circuit in many a season."

"If they play pro football for 100 years, they never can top Baltimore's first championship snatched dramatically in a sudden-death playoff… It seems pro football has come of age."

"One had to come away with the conclusion that the Colts-Giants' blockbuster was one of the greatest spectacles in sport's history."

"It will remain a keepsake for the ages."

"That nothing like this will ever again have such a tremendous and widespread fan reaction in the Baltimore sports realm seems a safe bet."

"A great day? There was never anything like it around here. And there never will be again. The first is the ever-loving most. Anything from now on can only be anticlimax. Writing it out to the last wonderful drop."

"Yes, the people were crazy. Yes, they went wild. They had a right to be. They'd seen a dream game on TV… I know how they felt. Because I felt that way to."

"Yes, it was Baltimore's greatest thrill, and mine."

A 17-year-old BILL PARCELLS, at a skating party in Lake Hopatcong, New Jersey, sat in a car for three hours listening to the game.

ALAN AMECHE left the locker room postgame celebration early. He could earn an extra $500 for an appearance on the "Ed Sullivan Show."

Colts defensive tackle ART DONOVAN was born on the Grand Concourse, only blocks away from Yankee Stadium.

LENNY MOORE, nicknamed "Spats" because he did not like the feel of adhesive tape on his bare skin and therefore had trainers tape his cleats, kept a miniature bible in his thigh pad.

Colts center BUZZ NUTTER chased down a security guard after the game to retrieve the ball Ameche had carried over the goal line -- and, with his teammates' approval, presented it to Marchetti as the game ball.