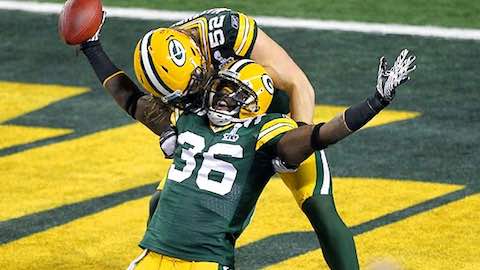 Coaches often reinforce to their players the importance of winning the turnover battle and creating game-changing plays on defense.

Those adages have proven true in the Super Bowl. With NICK COLLINS' 37-yard interception-return touchdown in the Green Bay Packers' 31-25 Super Bowl XLV victory against the Steelers, Super Bowl teams that have returned an interception for a TD are a perfect 11-0.

"Nick's interception was very big in the game," said Green Bay Packers defensive coordinator DOM CAPERS. "It came early and gave us a nice lead. That was one of the keys to our run in the playoffs, being able to take the ball away. To me, when you get in the playoffs and you get to the Super Bowl game, you look over the years, the team that wins the takeaway-giveaway normally wins the game."

The 11 Super Bowl championship teams with interception-return TDs in the title game:

Throwing from his own end zone, Ben Roethlisberger's arm was hit by nose tackle Howard Green as Collins grabbed the fluttering pass and returned it 37 yards down the right sideline for a touchdown, giving Green Bay a 14-0 first-half lead.

Porter's 74-yard INT-TD with 3:12 remaining capped a fourthquarter comeback and lifted the Saints to their first Super Bowl title in franchise history.

On first-and-goal from the Steelers' 1 with 18 seconds left in the first half, Harrison stepped in front of Kurt Warner's quick-slant pass and raced 100 yards down the right sideline for a touchdown on the longest play in Super Bowl history.

Smith accounted for two of the Buccaneers' Super Bowl-record five INTs and returned both for touchdowns. His first INT-TD (44 yards) staked Tampa Bay to a 34-3 lead in the third quarter, while his second score (50 yards) with two seconds remaining in the game punctuated the Bucs' first Super Bowl title.

With the Rams clinging to a 3-0 second-quarter lead, Law stepped in front of an out-pattern pass intended for Isaac Bruce and raced 47 yards untouched down the left sideline into the end zone for the game's first touchdown.

In the third quarter, Starks stepped in front of Amani Toomer and intercepted Kerry Collins' pass, returning it 49 yards for a touchdown that gave Baltimore a 17-0 lead.

Phillips, a reserve cornerback on the Bears' famed 46 defense, returned an INT 28 yards for a touchdown in the third quarter to give the Bears a 37-7 lead.

Squirek, a linebacker with no career interceptions before Super Bowl XVIII, picked off Joe Theismann's pass just before halftime and returned it five yards for the touchdown and a 21-3 lead.

Two fourth-quarter interceptions clinched the title for the Raiders, including Brown's 75-yard INT-TD, a Super Bowl record at the time.