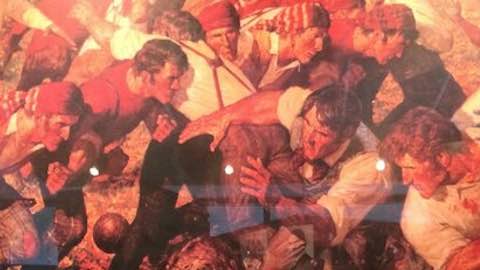 Over the next seven years, rugby gained favor with the major eastern schools over soccer, and modern football began to develop from rugby.

"The rivalry in the 1800s between Princeton and Rutgers was intense," said John W. Herbert, a Rutgers player and author of History of Football.

"For years each had striven for possession of an old Revolutionary cannon, making night forays and lugging it back and forth between the schools time and again. Not long before the first football game, the canny Princetonians had settled this competition by ignominiously sinking the gun in several feet of concrete. In addition to this, Princeton had beaten Rutgers in baseball by the harrowing score of 40-2. Rutgers longed for a chance to square things."

The stage was set. The rest is history.

25 players on each team positioned themselves upon a 140 x 70 yard field.

Each time a team scored, it counted as a game. The contest was complete after 10 games were played.

After each game, the teams switched directions and offensive team advanced the ball by kicking it or batting it with their hands, feet, sides, or heads.

Rutgers defeated Princeton 6-4, but the game ended on a friendly note and the teams shared a postgame meal.

"Princeton had the most muscle, but didn't kick very well, and wanted organization. They evidently don't like to kick the ball on the ground. Our men, on the other hand, though comparatively weak, ran well, and kicked well throughout. But their great point was the organization, for which great praise is due to the captain."