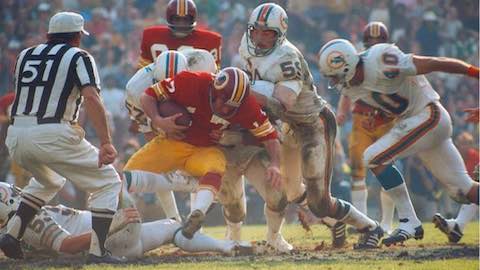 The Miami Dolphins completed the only perfect season in NFL history -- 17 games without a loss -- by defeating the Washington Redskins in Super Bowl VII 14 to 7.

The Dolphins played virtually perfect football in the first half as Miami's "No-Name Defense" permitted the Redskins to cross midfield only once (only four times overall) and their offense turned good field position into two touchdowns.

After Washington moved from its 17 to the Miami 48 with two minutes remaining in the first half, Dolphins linebacker Nick Buoniconti intercepted Billy Kilmer's pass at the Miami 41 and returned it to the Washington 27.

Jim Kiick ran for three yards, Larry Csonka for three, Griese passed to Jim Mandich for 19, and Kiick gained one to the 1-yard line. With 18 seconds left until intermission, Kiick scored from the one.

Washington's only touchdown came with 2:07 left in the game and resulted from a misplayed field-goal attempt and forward pass attempt by kicker Garo Yepremian, with the Redskins' Mike Bass picking the ball out of the air and running 49 yards for the touchdown. It was the longest period in a Super Bowl for one team to be held scoreless.

Suprisingly, the Redskins did not attempt an onside kick. The Redskins were forced to use up all of their timeouts on the Dolphins ensuing possession and after five plays forced the Miami Dolphins to punt from their own 36-yard line with 1:14 remaining in the game. After nearly blocking the punt, the Redskins gave themselves a chance to drive for the tying touchdown. However, the Dolphins defense forced two incompletions and a 4-yard loss on a swing pass, followed by defensive end Bill Stanfill's 9-yard sack on fourth down as time expired to end the game.

After losing to the Dallas Cowboys 24-3 in Super Bowl VI the previous year, the Dolphins bounced back emphatically despite losing quarterback Bob Griese for much of the season due to a leg injury.

The Miami Dolphins accomplished their perfect season due to dominance in two key facets. On defense, the Dolphins were led by the "No Name Defense", a suffocating group led by middle linebacker Nick Buoniconti, defensive tackle Manny Fernandez, and safeties Jake Scott and Dick Anderson. On offense, the Dolphins utilized a punishing ground attack, led by Larry Csonka and Mercury Morris, both of whom gained over 1,000 yards rushing on the season. This marked the first time in NFL history that two teammates rushed for over 1,000 yards each in the same season.

After going 14-0 during the regular season, the Dolphins had to come from behind to defeat the Cleveland Browns 20-14, and then, barely defeated the Pittsburgh Steelers 21-17 in the AFC Championship.

The Washington Redskins won the NFC East by ending the regular season with an 11-3 record. The Redskins were led by their colorful coach George Allen. Allen built the Redskins with veterans primarily and thus was born the nickname "The Over the Hill Gang."

In the playoffs, the Redskins easily defeated the Green Bay Packers in the first round 16-3, and then decimated their division rivals, the Dallas Cowboys, 26-3 in the NFC Championship Game.

The combination of the Redskins strong playoff performance versus the Dolphins narrow playoff escapes coupled with an easy regular season schedule had many favoring the Redskins in Super Bowl VII. 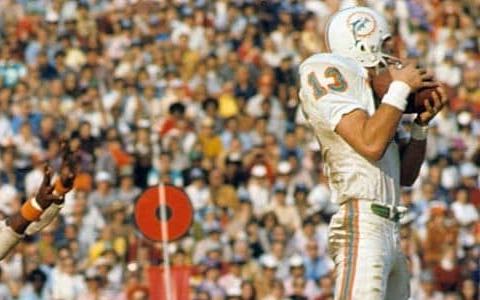 Dolphins safety Jake Scott had two interceptions including one in the end zone during the fourth quarter. That interception and his 55-yard return iced the game for the Miami Dolphins.

Miami's "No-Name Defense" was one of the big reasons the Dolphina achieved that perfect record, so it was only fitting that one of its members won the Most Valuable Player award in Super Bowl VII. 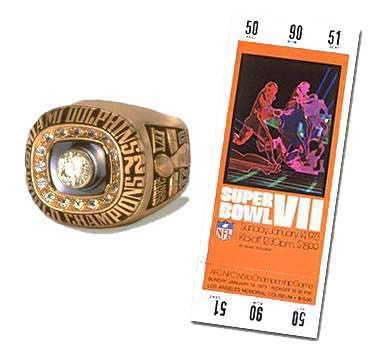