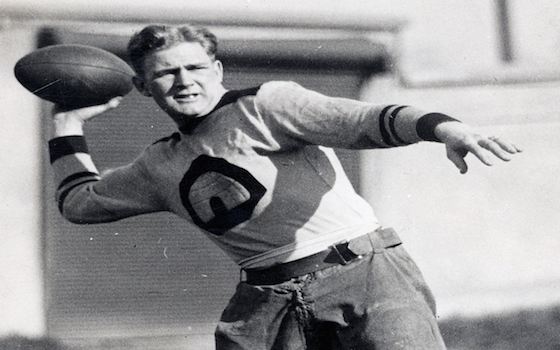 On November 28, 1929 -- Thanksgiving Day -- Chicago Cardinals halfback Ernie Nevers produced one of the most memorable performances in NFL history.

On a snow-covered field at Comiskey Park before approximately 8,000 fans, Nevers scored all of the Cardinals' 40 points, on six rushing touchdowns and four extra points, in their 40-6 win over the crosstown rival Chicago Bears.

"This was a game we just had to win," said Nevers in the book Ernie Nevers, Football Hero. "We were in the throes of deep frustration. In the previous four games against our bitter crosstown rival, we hadn't scored a single touchdown. Someone had to do something about it."

His records for rushing touchdowns in a game (six) and total points scored in a game (40) have never been broken, and stand as the oldest individual single game records in league history. Only two other players in the history of the league have ever scored six total touchdowns in a game -- Dub Jones of the Cleveland Browns in 1951 (four rushing and two receiving) and Gale Sayers of the Chicago Bears in 1965 (four rushing, one receiving and one punt return).

"The final score: Bears 6, Nevers 40!," said Chicago Bears founder and then-coach GEORGE HALAS in his book Halas. "Nevers was properly cheered by the 8,000 or so people, including the entire Notre Dame team brought there by (Knute) Rockne for a postseason course."

The previous week against the Dayton Triangles, Nevers had again scored all of his team's points in a 19-0 shutout. In two consecutive games, Nevers was responsible for all of the Cardinals' 59 points.

Although the 40 points against the Bears was the highlight of his professional career, Nevers was an all-around player with many talents. He was a member of the Pro Football Hall of Fame's inaugural class in 1963, and legendary football coach Pop Warner labeled Nevers as the greatest player he had ever coached, even superior to the great Jim Thorpe.

"My test of a great player is that he must be able to do all things, and do them equally well," said Warner. "Judged by this standard, the only man entitled to rank with Nevers is Thorpe, the most marvelous athlete the world has ever seen. Nevers' great advantages, however, are my chief reasons for putting him above Thorpe. Nevers had an indomitable spirit and a great love for the game."