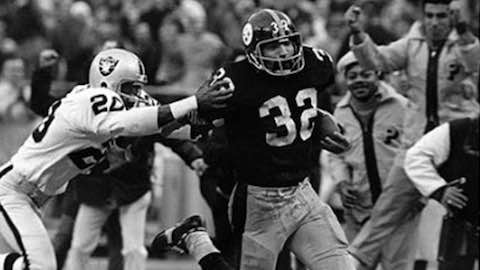 The man who pulled it off wasn't where he was supposed to be. Two others involved didn't even see it. The fourth participant didn't believe it happened -- legally, that is. And the man who would have been thrilled to see it was staring at elevator doors.

Pittsburgh Steelers running back FRANCO HARRIS, fullback FRENCHY FUQUA, and quarterback TERRY BRADSHAW, former Oakland Raiders safety JACK TATUM and Steelers owner ART ROONEY were the main players in a moment that may be the most memorable in the history of the National Football League -- the "Immaculate Reception" touchdown scored in the AFC Divisional Playoff game by the rookie Harris that magically occurred.

The Oakland Raiders, 1972 champions of the AFC Western Division with a 10-3-1 record, traveled to Three Rivers Stadium in Pittsburgh to face the 11-3 AFC Central champion Steelers in the Divisional Playoff game. It was the Steelers' second playoff game in their 40-year history. In 1947, they lost their first postseason game to Philadelphia 21-0.

"The Immaculate Reception," said Harris, "was really the start of a great decade for the Pittsburgh Steelers." Pittsburgh would collect four Super Bowl titles in six years during the 1970s.

With 50,350 fans -- many of who had attended a raucous pep rally the night before directly across the street from the Raiders' Hilton Hotel -- looking on, the teams maneuvered to a relatively quiet first half. Eleven minutes into the fourth quarter, the Steelers were up 6-0 thanks to two ROY GERELA field goals. That is where things got interesting. With three-and-a-half minutes left in the game, Oakland rookie quarterback KENNY STABLER, taking over for a fluweakened DARYLE LAMONICA, took the Raiders 80 yards in a 12-play sequence that culminated with a 30-yard touchdown run.

After the kickoff, the Steelers were at their own 20 with 1:13 left.

After completing his first two passes, Bradshaw threw three consecutive incomplete passes before he was faced with a fourth-and-10 play from his own 40-yard line with 22 seconds left. After desperately scrambling in the pocket, Bradshaw rifled a pass to fullback Fuqua.

All three -- Fuqua, Tatum and the ball -- collided. "I hit him and I thought the game was ours," said Tatum. "I looked down at him on the ground and he didn't have the ball."

The ball had rebounded like a rubber ball off a house, and headed straight for Harris. He was supposed to be in the backfield protecting Bradshaw, but he leaked out and tried to get open when he noticed the quarterback looking for a receiver.

"I saw Frenchy and Tatum go up," said Harris. "I saw the ball go up in the air and I said â€˜Oh no!' But then I saw the ball coming toward me and I figured we're not out of this yet."

The ball caromed nearly eight yards backwards and was caught in full stride by Harris, a mere hair's length away from the artificial turf at Three Rivers Stadium. Harris rumbled 60 yards and was surrounded by fans as he entered the end zone.

There was no signal by referee FRED SWEARINGEN on whether the touchdown counted. Both teams -- and fans -- ran onto the field, trying to find out what had happened, and what was going to be ruled. There were still 15 seconds to go in the game.

The lingering question surrounding the play was whom did the ball carom off of: Fuqua or Tatum? The 1972 NFL rulebook stated "If a defensive player touches a pass first, or simultaneously with or subsequent to its having been touched by only one eligible offensive player, then all offensive players become and remain eligible."

The Raiders said the ball bounced from Fuqua to Harris. "I came up and hit him from behind, and there wasn't any way I could have made contact with that ball," Tatum said.

After a conference call with the officiating crew, Swearingen disappeared into a dugout, and got on the phone to the press box to speak to ART MC NALLY, the NFL supervisor of officials. Swearingen said to McNally: "Two of my men ruled that the ball was touched by opposing players (Tatum and Fuqua), and caught by Harris," and that therefore the reception was legal, as was the touchdown. He then put the receiver down, ran back to the field, and signaled â€¦ touchdown! And 50,350 fans erupted.

Prior to the miraculous play and expecting a Steelers loss, Rooney, who purchased the team for $2,500 in 1933, snuffed out his cigar and entered an elevator for the long journey down to the field. By the time he reached the field, his club had completed the most improbable play in team history.