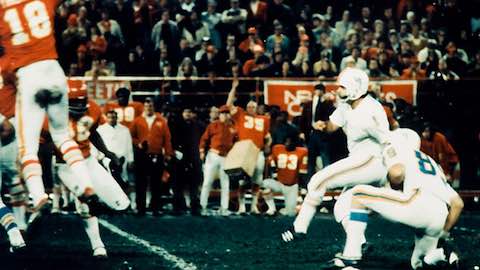 It was Christmas Day 1971. An AFC Divisional Playoff between the Kansas City Chiefs and Miami Dolphins. And the game that was played that day was like no other

It was Christmas Day 1971. The first-ever NFL playoff game to be played on the holiday was an AFC Divisional Playoff between the Kansas City Chiefs and Miami Dolphins. The temperature was a balmy 61 degrees.

But the game was not in Miami; it was at Kansas City's Municipal Stadium.

"Kansas City at Christmastime can be bitterly cold," said Chiefs Pro Football Hall of Fame quarterback LEN DAWSON. "We were hoping for that. But what we got was Miami weather. It was like no other Christmas I ever saw in Kansas City."

And the game that was played that day was like no other; it turned out to be -- and remains -- the longest game in NFL history: 82 minutes and 40 seconds.

The Chiefs, who had won Super Bowl IV in January 1970, jumped out to a quick 10-0 first quarter lead before Miami answered with 10 second-quarter points. The score was tied 10-10 at halftime.

Each team scored a touchdown in the third quarter. In the fourth, Kansas City running back ED PODOLAK, who would have an NFL-playoff record 350 all-purpose yards in the game, scored on a three-yard run with 6:46 remaining to give the Chiefs a 24-17 lead. Miami quarterback BOB GRIESE then threw a five-yard touchdown pass with 1:36 left to conclude a game-tying scoring drive on which he completed six of seven passes for 72 yards.

With 2:39 remaining in overtime, Miami had a chance to win; but GARO YEPREMIAN's 52-yard field goal attempt sailed wide left. The game then went into a second overtime before Yepremian kicked a game-winning 37-yard field goal 7:40 into the period.

It was the first playoff victory in franchise history for Miami and started the club's run to three consecutive Super Bowls, two of which the Dolphins won.

"In many senses that game really launched the Dolphins into their dynasty," said Pro Football Hall of Famer LARRY CSONKA, who rushed for 86 yards and one touchdown in the game. "That game proved to us that we could overcome any adversity, that we could defeat anyone. It is fair to say that it was not only a great game, but also a defining moment in NFL history."