1956 Championship: The Game That Made The NFL 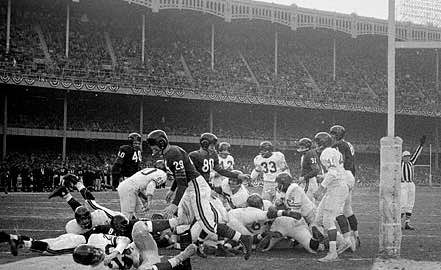 1956 Championship: The Game That Made The NFL

Many, including those who played in the 1956 NFL Championship Game between the Giants and Bears, say it was among the most significant in NFL history -- perhaps even more so than the fabled 1958 Championship game.

In 1956, the NFL staged its "World Professional Football Championship Game" between the Giants and Chicago Bears at Yankee Stadium. Many, including those who played in it, say it was among the most significant in NFL history -- perhaps even more so than the fabled 1958 "sudden-death" NFL title game.

The NFL, 36 years old at the time, was not what it is today. The game was not sold out. Pro football on television was still in its infancy. T-shirts and umbrellas didn't contain NFL team logos. But the 1956 Championship Game -- won handily by the Giants, 47 - 7 in 18-degree weather -- seemed to change all that.

The excitement and glamour of professional football, epitomized by the Giants, captivated New York's marketing and advertising community for the first time. The TV networks, still developing, suddenly had a new sports vehicle that could help them grow.

"I'll always believe that that game and how it opened everyone's eyes to the excitement of pro football was the key to the development of the NFL, more so than the 1958 title game that gets more attention," recalled Pro Football Hall of Famer FRANK GIFFORD 50 years after the game. Gifford was a halfback for the Giants and thereafter the longtime play-by-play voice of NFL Monday Night Football.

"People forget what the NFL was like in those days. It was not America's No. 1 sport. The game wasn't even a sellout. But once we played the game, we became heroes in New York. The thing just grew from there."

So did many of the people involved.

The Giants had two assistant coaches named Lombardi and Landry. VINCE LOMBARDI ran the offense and TOM LANDRY the defense. "All I have to do with these guys around is check curfews and pump up footballs," said head coach JIM LEE HOWELL. "Vince and Tom take care of the rest."

Robustelli, who now owns a successful sports marketing/travel agency in Stamford, Connecticut, helped the team with his playing -- and entrepreneurial skills. He had ordered 48 pairs of sneakers from U.S. Keds the week before the game for extra traction on the frozen Yankee Stadium field.

"They made all the difference," said Robustelli.

The Giants wore their new sneakers from the beginning of the game. Twenty-two years earlier, they donned sneakers at halftime of their 1934 NFL Championship Game victory over the Bears.

In the 1956 game, the Giants' GENE FILIPSKI ran back the opening kickoff from the Bears' Blanda 53 yards to the Chicago 39.

"When you run up against some fellows playing like that," said Bears head coach Driscoll, "there's just nothing you can do." People were impressed.

"The stands (were) packed with a crowd of 56,836 fans, bundled up against the cold, but warmed out of their usual big-city sophistication by an afternoon of great football," said Sports Illustrated in its report on the game. "For this was a day of excitement and vindication -- a sporting thrill to match the drama of the perfect game Don Larsen pitched against the Brooklyn Dodgers on the same field only a few months ago."

It was a significant turning point in NFL history -- a championship in the nation's media capital at the dawn of the television age. 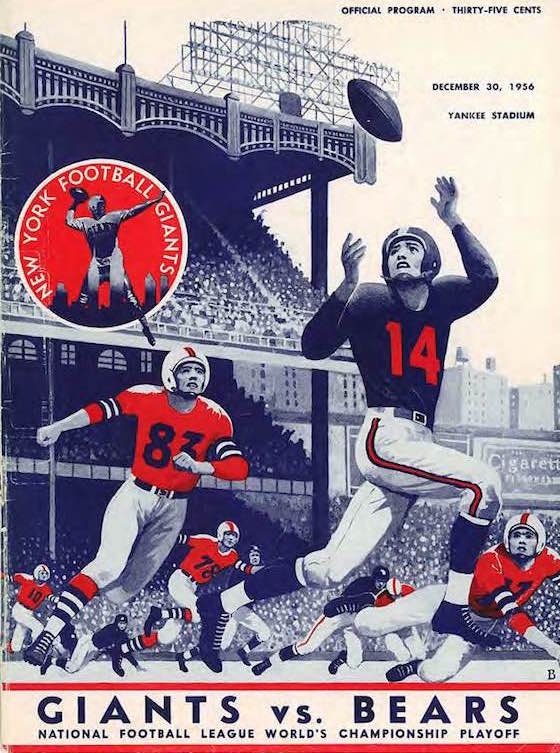 "It was the coldest I'd been in my life," said the Bears' longtime chairman of the board. "We attended 'My Fair Lady' the night before the game, and when we left the theatre, an ice storm set in. It was a miserable night and the next day the field was a mess.

"We were sitting with GEORGE HALAS in the upper deck and the cold and the wind were unbelievable. After the Giants scored the first touchdown, Halas left the stands and went down to the sidelines. He couldn't save us, and we got beat soundly."

WELLINGTON MARA remembered the attitude of his players. "It was the culmination of a team of overachievers," said Mara, the Giants' owner. "We had some lickings during the year."

IT WAS the second "Sneakers Game" between the Bears and Giants. In 1934, the Giants won their first NFL Championship 30- 13 over the Bears on a frozen field at New York's Polo Grounds when they switched from cleats to sneakers at halftime and overcame a 13-3 deficit.

GIANTS HEAD COACH JIM LEE HOWELL thought his team showed "too much levity" in the locker room before the game. "I always thought players should be pretty quiet and alone before the big game," said Howell after the win. "At least that's the way we always were when I played."

BEFORE THE GAME, Howell sent out two of his players to test the frozen field. Defensive back ED HUGHES wore regulation cleats, running back GENE FILIPSKI the team's new sneakers. A few yards into his sprint, Hughes took a hard spill when he lost traction. Filipski had no trouble with footing. "Everyone wears sneakers," Howell announced.

"I don't know where they got theirs," said Bears head coach PADDY DRISCOLL. "But those sneakers were better than ours. The soles were thicker than the soles of our shoes. I think this helped their footing greatly."

HOW COLD WAS IT? It was so cold that the mimeograph machine in the press box froze.

SNEAKERS ... AND GLOVES: Giants quarterback CHARLEY CONERLY relieved DON HEINRICH at the end of the first quarter and wore golf gloves along with his sneakers. Fellow Mississippian JACKIE PARKER, who played for the CFL Edmonton Eskimos, recommended them. After fumbling, Conerly discarded the gloves -- at the advice of his teammates. "The boys thought I would do better without the gloves," said Conerly. "When I fumbled, I had to agree."

VINCE LOMBARDI, the Giants' offensive coach, was pleased with his team's blocking. "We were on our way when Gene Filipski returned the opening kickoff 53 yards," he said. "That good criss-cross blocking for the runner, who went straight up the field, showed the team was out for a 33-man effort."

THERE WERE 15 DAYS between the end of the 1956 regular season and the title game. The Giants gave their players four days off. The Bears got only Christmas Day off. "We overtrained," said Bears quarterback ED BROWN.

MOST OF THE GIANTS had a walking commute to the stadium. The majority of the team lived during the season at the Concourse Plaza Hotel, only two blocks from Yankee Stadium. "We all got along so well," remembers fullback ALEX WEBSTER, who scored two rushing touchdowns in the game. "We spent a lot of time together off the field."

GIANTS DEFENSIVE COACH TOM LANDRY, who had just retired as a player-coach before the season, helped make stars of defensive players for the first time. He popularized the "4-3" defense while most clubs were still using five-man fronts.

NFL Football History: "1956 Championship: The Game That Made The NFL"