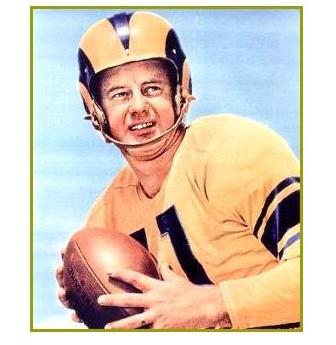 A Waterfield injury sidelined the incumbent quarterback prior to the season opener against the New York Yanks on September 28, and opened the door for Van Brocklin to show his worth.

Norm Van Brocklin took advantage of the opportunity to produce the most prolific passing performance in NFL history.

Van Brocklin threw for an NFL record 554 yards in a 54-14 rout of the Yanks at the Los Angeles Coliseum. The Pro Football Hall of Fame quarterback tossed five touchdowns and completed 27 of 41 passes.

"It's the finest exhibition of passing I've ever seen," said Rams Coach Jimmy Phelan after the game. "Van Brocklin was hitting them in the eye practically every time he threw the ball." Van Brocklin, who passed away at the age of 57 in 1983, remained subdued about the performance. "Everything I threw seemed to be caught and run for a long gain," he said.

"They don't need me out here anymore," said Waterfield after the game. The two quarterbacks would split time for the rest of the season as the Rams captured the 1951 NFL Championship.

Van Brocklin's record has stood for over 60 years.

In 2012, Schaub, then with the Houston Texans, passed for 527 yards against Jacksonville on November 18, while Moon had a 527-yard day for the Houston Oilers against Kansas City on December 16, 1990.

NFL QB's Who've Thrown for 500 Yards in a Single Game