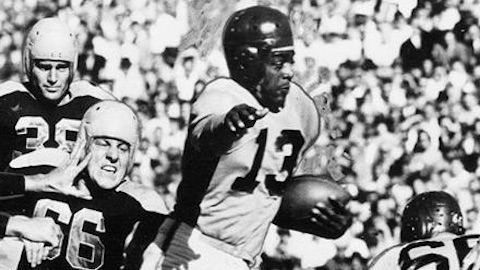 In 1946, the Cleveland Rams relocated to Los Angeles, becoming the first top-level sports team on the West Coast. But the move turned out to have far greater historic implications.

The Rams turned their attention to a recently graduated player at nearby UCLA: halfback Kenny Washington. In 1939, Washington was the nation's leader in total offense, and was the first UCLA player to be named an All-American. After college, he began a successful minor league career, playing for the Hollywood Bears of the Pacific Coast Pro Football League and the San Francisco Clippers of the American Football League. He was consistently one of the most popular football players on the West Coast.

The Rams signed Washington, along with his UCLA teammate, end WOODY STRODE, making them the first African-Americans to play in a major sports league in the modern era (post-World War II).

The Rams' signings helped jumpstart the integration of American sports. Later in 1946, the Cleveland Browns (then of the fledgling All-America Football Conference) signed fullback Marion Motley and guard BILL WILLIS -- both of whom are now in the Pro Football Hall of Fame.

Washington played three seasons with Los Angeles before being hampered by knee injuries.

Strode played one season with Los Angeles, but ended up with a successful career as a character actor in Hollywood. He appeared in nearly 100 television shows and films alongside actors ranging from LEE MARVIN and BERT LANCASTER to RUSSELL CROWE and LEONARDO DI CAPRIO. One of his most visible, albeit minor, roles was in Spartacus, in which he fought KIRK DOUGLAS to the death.

Motley and Willis -- whose Browns joined the NFL in 1950 -- had longer careers. Motley, who was the AAFC's career rushing leader when it disbanded, played with Cleveland until 1953 (being selected to the 1951 Pro Bowl), then spent the 1955 season with the Pittsburgh Steelers. Willis also stayed with the Browns until 1953, making the Pro Bowl from 1950-53.

Both on and off the field, the impact of Washington, Strode, Motley and Willis paved the way for the current generation of players, coaches and executives.

Kenny Washington becomes the first African-American to play pro football in the modern era when he is signed by L.A. Rams owner Daniel F. Reeves. It has been suggested that Reeves' signing of Washington and his UCLA teammate Woody Strode paved the way for Branch Rickey's decision to sign Jackie Robinson.

Paul Brown signs guard Bill Willis and fullback Marion Motley to the Cleveland Browns. Along with quarterback Otto Graham, Willis and Motley led the Browns to four All-American Football Conference titles before joining the NFL in 1950.

Jim Brown begins a nine-year career with the Cleveland Browns that would make him one of the NFL's all-time greats (nine Pro Bowls; eight league rushing titles; 12,312 rushing yards; 126 total TDs and selection to the Pro Football Hall of Fame).

Former running back Claude (Buddy) Young becomes the first black executive in pro sports when the NFL names him director of player relations. Young holds that position until his death in 1983.

Gene Upshaw becomes executive director of the NFL Players Association, a position he held until his death in 2008. Upshaw served as the alternate representative or player representative for the Oakland Raiders from 1970-76 during his years as a player. He was a member of the NFLPA Executive Committee from 1976-80 and served as president of the NFLPA from 1980-83.

Washington's Doug Williams becomes the first African-American quarterback to start in and win a Super Bowl, leading the Redskins to a 42-10 victory over the Denver Broncos in Super Bowl XXII by throwing a then-NFL record four touchdown passes, all of which came in the second quarter of the game.

Two months after entering the Pro Football Hall of Fame as one of the game's greatest offensive tackles, Art Shell is named head coach of the Oakland Raiders (promoted from offensive line coach). Shell becomes the NFL's first modern-era black head coach and the first overall since Fritz Pollard in 1921. He posts a 56-41 career record with the Raiders from 1989-94, including three playoff appearances.

After a 13-year career with the Cleveland Browns in which he became the alltime leading receiver in franchise history with 662 receptions, and after helping the Baltimore Ravens to a Super Bowl XXXV title as director of pro personnel and later senior VP of football operations, Ozzie Newsome becomes the first African-American general manager in NFL history.