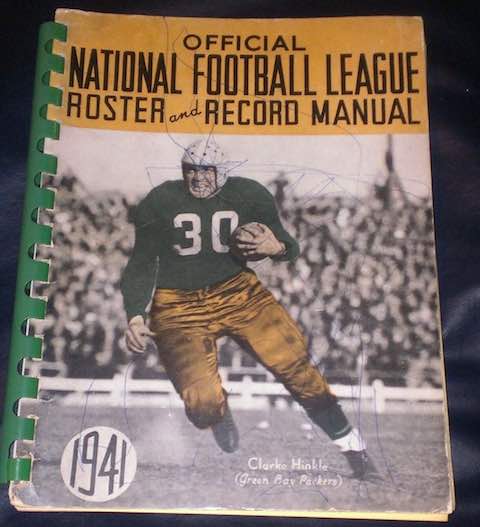 The NFL has come a long way -- and so has how we read about it. Back in 1941, the league published its first official guide. It contained information about all-time records, rosters for the upcoming season and statistics from the previous year. But the familiarity ends there.

The NFL has come a long way in the past 75 years -- and so has how we read about it.

Back in 1941, the league published its first official guide, the Official National Football League Roster and Record Manual. It contained information about all-time records, rosters for the upcoming season and statistics from the previous year.

But the familiarity ends there.

For one thing, the NFL has gained 75 more years of history since the first book was published.

That's a lot more pages. Today, if you want to find out what team allowed the fewest yards in a season, you'd turn to -- or click to, if you're accessing the digital version -- page 581 of the nearly 700-page 2016 NFL Record and Fact Book. If you wanted to find the same thing 75 years ago, you'd only have to go to page 8 of the 80-page manual to find your answer. And don't bother looking for "rushing stats" in the 1941 edition: the book refers to it as "ground gaining."

But beyond the relative weight of the books, the differences go much further into the cultural changes the NFL and the nation have experienced in the last seven decades.

Much of the bulk of the manual is composed of the familiar roster listings for each team. But the 1941 manual goes beyond the usual position, height, weight and college listings. For every player, their ethnicity is listed (between their residence and their

marriage status). For example, Pro Football Hall of Famer ALEX WOJCIECHOWICZ is listed on the Detroit Lions roster as:

That last entry shows another huge change: for each player, their offseason occupation was listed. Back in the days before the NFL's popularity became what it is today, all players had other jobs. The manual features players with day jobs ranging from "laborer" and "rancher" to "oil company executive" and "railroad detective."