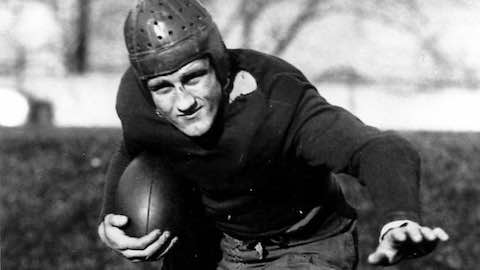 On December 18, 1932, the NFL had its first playoff game and first indoor game. Here's the details about one of the most significant games in NFL history.

One of the most significant games in NFL history occurred at the end of the 1932 season. Both the Chicago Bears and the Portsmouth Spartans (renamed the Detroit Lions in 1934) finished the season in a first-ever tie for first. Chicago was 6-1-6 and Portsmouth 6-1-4. Since the teams had already tied twice during the season, the league office ruled that a "playoff," which counted toward the season standings, would be needed to determine a champion.

Chicago's Wrigley Field was scheduled to host the game but a blizzard made it impossible to play, and the game was moved indoors to Chicago Stadium. So on December 18, 1932, the NFL had its first playoff game ... and first indoor game.

The history-making didn't stop there. Because of space limitations, the field was only 80 yards long, and the following changes were dictated:

- Ball spotted on hashmarks drawn 10 yards from each sideline.

Perhaps the most significant development of the game occurred on a play in the scoreless fourth quarter.

Bears back Bronko Nagurski took a snap from the two-yard line, faked a run, dropped back to pass and connected with back Red Grange for the game-winning touchdown. But a controversy immediately arose as to where Nagurski was when he threw the ball. The rule at the time stated that a forward pass had to be thrown from at least five yards behind the line of scrimmage. The officials overruled Portsmouth's protest that Nagurski was not five yards from scrimmage, and the touchdown stood. Chicago went on to win 9-0 and claimed its second league championship.

At a February league meeting, the NFL was changed forever when a forward pass thrown from anywhere behind the line of scrimmage was legalized. Also, as a result of the success of the game, the league was divided into two divisions with the division winners meeting in an annual championship game.