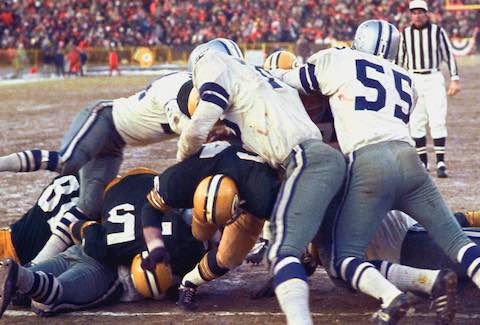 Great players. Great coaches. Great plays. Arctic weather. They all combined for one of the most memorable games in NFL history -- the 1967 NFL Championship, better known as the 'Ice Bowl'

Great players. Great coaches. Great plays. Arctic weather. They all combined for one of the most memorable games in NFL history.

The Green Bay Packers defeated the Dallas Cowboys 21-17 in the coldest NFL game on record: the 1967 NFL Championship dubbed forevermore as the "Ice Bowl."

The Cowboys came to Green Bay as upstarts seeking their first NFL title and had the momentum of a 52-14 win over the Cleveland Browns in the Eastern Conference Championship Game the week before. In addition, the Cowboys had gained experience from their narrow 34-27 loss to Green Bay in the 1966 NFL Championship when quarterback DON MEREDITH's possible game-tying pass was intercepted in the end zone with 28 seconds remaining.

Green Bay entered the game as two-time defending NFL champions, vying to become the first team in league history to win three consecutive championships since the playoff system was instituted in 1933.

But the Packers were not the same club that had dominated the league in the early and mid-1960s. They were older, had struggled to a 9-4-1 record, and were without future Pro Football Hall of Fame running backs PAUL HORNUNG (retired) and JIM TAYLOR (with New Orleans) for the first time. Packers quarterback BART STARR knew his team was in for a stiff challenge.

"Coach Lombardi was quick to point out all week long how good the Cowboys were and what respect he had for them," said Starr. "We had seen the year before when they were a younger team how well they had played against us in the championship game down in Dallas. We knew this was going to be a special game and it was."

What was already a great matchup was made more intriguing by the sub-zero temperature. The official game-time temperature was 13 degrees below zero with the wind chill at minus 48 degrees. It was -- and remains -- the coldest game in NFL history.

"It was 20 degrees the day before," said Cowboys head coach TOM LANDRY. "It was great. Vince (Lombardi) and I were together that night and we talked about how good the conditions were and what a great game it would be." 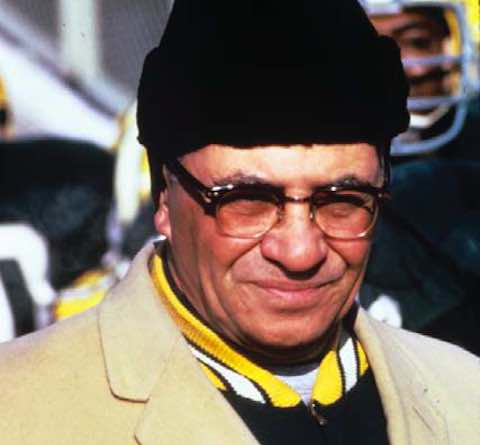 But a cold front was moving in, and by the next morning, it had arrived.

"The operator said, 'It's 7:30 AM and 19 below,'" said Cowboys linebacker LEE ROY JORDAN. "I got up out of bed, looked out the window and saw 40 other guys staring out in disbelief. It was cold."

"We weren't prepared for that kind of cold," said JIM TUNNEY, who served as the alternate referee of the game and patrolled the Packers' sidelines. "We went out that morning and rousted the store owners out of bed. We got more thermals and gloves."

When the teams arrived at the stadium, they found the field nearly frozen. A layer of condensation had built up between the field and the covering tarpaulin the night before. When the tarpaulin was removed and the field was exposed to the bitter cold, it froze.

"Astroturf was like a pillow compared to this," said Packers running back CHUCK MERCEIN.

The Packers began the game like two-time defending champions. Starr hit wide receiver BOYD DOWLER with an eight-yard touchdown pass to give Green Bay a 7-0 first-quarter lead. In the second quarter on third-and-one, Starr connected with Dowler again, this time for a 46-yard touchdown and a 14-0 advantage.

But the Cowboys began adjusting to the cold and came to life in the second quarter.

"After you forget about how cold it is and all the other things that are going through your mind, you just figure you've got to go play football," said Cowboys cornerback CORNELL GREEN. "They weren't going to cancel the game or call it off so you better get it in, try to play and try to win. That's when we started playing better."

The Dallas defense stepped up. Defensive end GEORGE ANDRIE recovered a Starr fumble and returned it seven yards for a touchdown, cutting the Packers' lead to 14-7. Another Green Bay fumble led to a second Dallas score -- a 21-yard field goal by kicker DANNY VILLANUEVA. The Cowboys had stormed back and trailed by only a 14-10 score at halftime.

Despite the freezing temperatures, 50,861 fans braved the cold. The game was a sellout.

"The fans were tough to stay out there and watch that game," said Green. "I have to give them a lot of credit. There's some tough people in Green Bay."

When the second half began, the Cowboys continued their defensive dominance and stifled the Packers. The Dallas offense started to move the ball and was poised for a score at the beginning of the fourth quarter. Running back DAN REEVES took a handoff, ran to his left, stopped to throw and hit a wide-open LANCE RENTZEL for a 50-yard touchdown and the Cowboys' first lead of the game, 17-14.

"It was a difficult play," said Landry. "I don't think the Packers expected it. They didn't expect that we would throw a pass like that. It was a big play and it put us into position to win the game."

It was the biggest play of the game to that point. But Green Bay wasn't finished.

After playing a 37:15 stretch without scoring, the Packers found themselves down to their last chance. With 5:04 remaining in the game and trailing 17-14, Green Bay received a punt at its own 32-yard line and began one of the greatest touchdown drives in NFL history. A third NFL championship awaited 68 yards away.

"We were ready on that last drive," said Starr. "We were totally focused on what we needed to do in order to go down and win the ballgame. As I looked into the eyes of my teammates, I knew all I had to do was call the play."

On first down, Starr passed to running back DONNY ANDERSON for six yards. Mercein ran around right end for seven. Starr completed his second pass of the drive to Dowler for 13 yards. The Packers had crossed midfield, but on the next play, Anderson lost nine yards on a handoff. Starr regained those yards with a 12-yard pass to Anderson, but now faced third-and-seven at the Dallas 39.

"One thing most people don't know about that game," said Starr, "was the excellent awareness of our two running backs, Anderson and Mercein. Twice during the final drive, they made me aware that they were open as secondary receivers." Starr completed his fourth pass of the drive to Anderson for nine yards and a first down. On the next play, he connected with a wide-open Mercein in the left flat who then ran to the Dallas 11 for a 19-yard gain. It was Starr's final pass of the game. He finished a perfect five-for-five on the drive.

On the next play, with 1:11 remaining, Starr called "30 Give." Tackle BOB SKORONSKI opened a hole with a powerful block and Mercein charged through the middle to the three-yard line for a gain of eight.

"It is the best play I ever called in my career," said Starr. "It's hard to explain why we had not run it before that. I just didn't feel that the time was correct, but at that moment I knew it was the play to call."

Anderson took a handoff and gained two yards to give the Packers a first-and-goal at the one-yard line with 30 seconds remaining. Starr handed off to Anderson again, but he slipped and fell short of the goal line. They tried the same play again and got the same result.

Starr called the Packers' final timeout and asked his linemen if they had enough footing to run "31 Wedge."

They said they did. "31 Wedge" was put into the Packers' playbook by Lombardi during the week after guard JERRY KRAMER had noticed a weakness in the Cowboys' short-yardage defense and suggested the play.

On the sidelines, Starr suggested to Lombardi that he run it instead of the backs because of the poor traction. Lombardi replied, "Then run it and let's get the hell out of here."

When the ball was snapped, Kramer and center KEN BOWMAN plowed into Cowboys defensive tackle JETHRO PUGH, opened a hole and Starr lunged through for the game-winning touchdown and a third consecutive NFL championship.

"I understood my responsibility," said Kramer. "If I don't get a great block, we don't do it. I understood perfectly."

"I don't know if the execution on that drive, under those conditions, will ever be surpassed," said Packers tackle FORREST GREGG.

The Cowboys had time to try some desperation passes, but they all fell incomplete. The "Ice Bowl" was over. Packers 21, Cowboys 17. The Green Bay Packers were NFL champions again. They went on to win Super Bowl II two weeks later in somewhat warmer conditions in Miami, Florida.

"What that game meant was unbelievable," said Starr. "We had fought through a very tough year. We won two consecutive championships prior to that and to have it come down to such brutal conditions and to win it in that fashion, from our perspective, we think it was the greatest game of all time."

In this segment of "A Football Life: Vince Lombardi", Lombardi and the Packers are going for the first-ever three-peat in NFL history in the 1967 NFL Championship Game, better known as "The Ice Bowl".