Why is China Militarising the South China Sea? 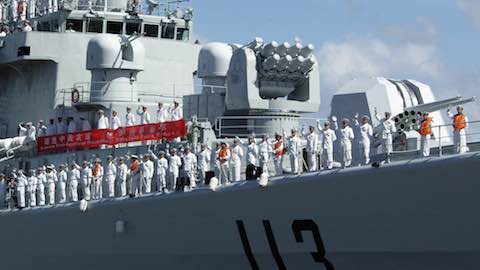 What really explains China's decision to build military installations in the disputed waters of the South China Sea? Sukjoon Yoon thinks that we should view China's militarization of the region as a misguided political choice rather than a desire for increased military flexibility.

Recent Western reports confirm that China is militarising disputed reefs and shoals in the South China Sea. China will obtain no military benefit from this but will simply acquire some weak naval bases at the cost of antagonising rival claimants.

Even as ASEAN nations are responding warmly to China’s “Maritime Silk Road” initiative, dredging operations for land reclamation works are going on at seven disputed reefs and shoals in the South China Sea. Naval and air force facilities are being established: new piers and wharves, extended airstrips, and military garrisons with radar installations and coastal artillery. Does this militarisation of the South China Sea really help China to become a “true maritime power” as exhorted by President Xi Jinping?

The South China Sea is a large semi-enclosed sea which carries a third of the world’s shipping and has vast oil and gas reserves; it therefore has enormous geostrategic and economic significance. Recently, there have been growing tensions between China and ASEAN members concerning numerous small islands which are either permanently submerged or exposed only at low tide. Seeing China’s determination to apparently reestablish its historical dominance of the South China Sea, all the Southeast Asian nations, especially those with territorial claims disputed by China, are currently building up their naval capacities.

Unfortunately, the People’s Liberation Army (PLA) Navy (PLAN) seems to be ignoring the reality of modern naval warfare, which does not need widespread and numerous geographical assets, but instead relies upon expeditionary naval forces which are permanently at sea and always prepared to go where they are required.

In fact, the PLAN is taking some sensible steps to transform itself into a modern navy capable of undertaking far-sea operations: it is building its first true aircraft carrier much bigger and more capable than the refurbished Russian-designed Liaoning, and also the Type 055, a new-generation destroyer with phased array air defence radar and impressive missile capabilities.

US-based Defense News reports that the PLAN is investigating the feasibility of establishing a Fourth Fleet, apparently in the Indian Ocean. The Chinese Coast Guard has also become more prominent: last year they rammed and used water cannons against Vietnamese vessels trying to intercept a Chinese drilling rig.

The PLAN has successfully developed into a blue-water navy, expanding its submarine forces and deploying a surface task unit to the Indian Ocean. But the militarisation of the Paracels and Spratlys in the South China Sea over the last few years, building military garrisons, coastal defence positions, runways, large aircraft hangers, logistics facilities etc., does nothing to extend the PLAN’s far-sea operational capabilities. These efforts are of dubious military value, so presumably they represent a political statement.

The South China Sea is notorious for its bad weather conditions and rough seas, and the difficulty of conducting all-weather naval patrols and maritime interdiction missions in such circumstances is obvious; there may be less than 60 days per year when the weather allows the berthing of small- or medium-sized naval vessels at piers or wharves of the artificial islands. Unless the facilities are built on a very large scale, they will be inadequate to protect even fishing vessels from the frequent typhoons.

As to aircraft, it will not be straightforward for the PLA Air Force to operate its Su-27SKs from such artificial islands. Their state-of-the-art technology requires advanced logistical and maintenance capacities, and their pilots are unused to taking off and landing from runways without taxiways. Moreover, hangered Su-27SKs could be easily monitored by satellites and targeted by long-range drones.

The radar installations on the artificial islands are also likely to prove inferior to those already available on a variety of PLAN surface platforms, which have better three-dimensional coverage. Basically, there is no military justification to build these artificial islands, so the PLA leaders who took the decision undoubtedly have more political than operational experience.

Sadly, therefore, we should see the militarisation of the South China Sea as a misguided statement of China’s political choices, rather than an expression of military flexibility. For more than 10 years now, the PLAN’s naval modernisation has focused on the assertive manifestation of solid naval power. Of course, this has disturbed China’s neighbours, the small and weak ASEAN countries, as well as sending the wrong signals to Japan and the United States: this is not the way to become a true maritime power.

Throughout history, most maritime powers striving for “command” of their seas to protect their national commerce and other interests have faced severe financial and military resources deficits, so that absolute sea control has remained a matter of political imagination.

The US is now clearly treating China as a major threat: it has transferred some older naval and coast guard vessels to ASEAN navies, and the commander of the US Navy Seventh Fleet has expressed support for US-ASEAN joint naval patrol operations in the South China Sea. Likewise, although the ASEAN countries have welcomed Xi Jinping’s “Maritime Silk Road” initiative, their navies are lobbying for funds to upgrade their dilapidated naval bases, and to acquire advanced platforms and weapons from foreign suppliers.

The South China Sea disputes are unnecessarily complicating China’s own progress: surely China’s “peaceful rise” should contribute to the common destiny of East Asia. On a more positive note, the PLAN is starting to develop a conceptual understanding of modern naval warfare and to incorporate this into its strategic approach. This militarisation of the South China Sea is a fruitless distraction: China will only become a true maritime power by making further adjustments to outdated mindsets, both within the PLAN and also in the wider political leadership.

Dr. Sukjoon Yoon is a Senior Research Fellow at the Korea Institute for Maritime Strategy (KIMS), and a visiting professor at the Department of Defence System Engineering, Sejong University, Seoul, South Korea.

Why is China Militarising the South China Sea? - Current Events in Asia