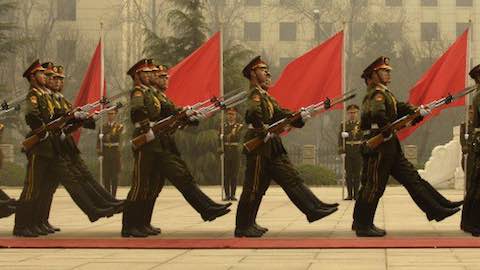 It turns out that that a large-scale conflict in the Asia-Pacific is much more difficult to imagine than China hawks like to pretend.

China has become the bête noire of U.S. security policy, the new universal enemy to replace the Soviet Union.

Its economic power and rapid military build-up, after all, make it a much more credible long-term threat than Putin’s Russia or the Islamic State. When policy pundits and military men want to spread alarm about the decline of America and beat the drum for increased defense spending, their scary enemy of choice is China.

Take James Jay Carafano, a retired military man and a policy pundit at the right-wing Heritage Foundation who raises the possibility of “a U.S.-China Nuclear War.” He argues at The National Interest that keeping the peace between China and the United States “requires significantly recapitalizing the U.S. armed forces.” This is necessary, he says, to assuage the doubts and insecurities of America’s allies. He argues that Washington “has to close any gap in military power that the Chinese might think could be exploited.”

That’s a lot of gap-closing.

Carafano identifies America’s “key objectives” in the region as “maintaining freedom of the commons (air, sea, space, and cyberspace) and limiting the potential for large-scale regional conflict.”

These certainly are U.S. interests. But are they U.S. responsibilities? And what exactly do these two general principles mean in practice when applied to the Asia-Pacific region?

It turns out that that a large-scale conflict in the region is much more difficult to imagine than China hawks like Carafano like to pretend.

The devil is in the details.

Could a more capable Chinese army choke off that trade? Of course it could. Any country can shut down sea lanes with patrols and anti-ship mines. But nearly all of the civilian navigation in question represents trade to and from China. It’s hard to imagine any circumstance under which the Chinese government would want to shut it down.

Ditto the airspace over China’s near seas. Nearly all of the civilian aviation through it consists of flights to and from China.

Space and cyberspace are more difficult commons to control. But the effective militarization of space has long been a Star Wars fantasy, and China’s cyberspace is essentially a walled garden. Anarchist hackers pose as much of a threat to the Internet as the Chinese military does. While all forms of Internet security need improvement, they don’t particularly need improvement on account of a specific threat from China.

Trouble in the Neighborhood?

What about regional conflict? China’s growing military certainly sounds like a regional menace. But a menace to whom? Here again the details get in the way of the China threat story.

To the east, Japan’s government is responding to Chinese expansion by boosting its own defense spending to record levels, proposing to change its pacifist constitution to allow greater military flexibility, and making a renewed push to resolve the long-standing Kuril Islands dispute with Russia. If Prime Minister Shinzo Abe finally succeeds in making peace with Russia, that would leave China and its ally North Korea as the sole focus for Japan’s entire military capacity. Japan is a rich, technologically advanced country of 127 million people. It can look after itself.

For very different reasons, China poses little threat to South Korea. China increasingly views North Korea more as a burden than as an advance column for an attack on the South. And China has recently been courting South Korean technology investment in order to reduce its dependence on Japan.

Political relations across the Taiwan Strait are inevitably dominated by questions over the status of Taiwan. Every election in Taiwan sparks talk about and fears of Chinese invasion. But no country in the world has staged a large-scale amphibious assault since the U.S. landings at Incheon, South Korea in 1950. For more than half a century, even American adventures abroad have been small-scale (Grenada) or launched from land bases (Iraq).

The Chinese military will never have the capacity to invade Taiwan against armed resistance -- not now, not later, not ever. It just can’t be done in the contemporary military context in which a single cruise missile can sink a transport ship carrying thousands of troops. It makes no sense to worry about something that is not technically possible.

The Philippines? Why would China want to invade the Philippines? Vietnam, Laos, Myanmar? Ditto, ditto, ditto. China is involved in a plethora of minor border disputes with its neighbors, but none of these involve core territorial interests or serious legal claims that China (or most of its neighbors, for that matter) have historically been interested in pushing. They’re all frozen conflicts that are unlikely ever to thaw.

Some pundits worry about the increasing Chinese presence in the Indian Ocean. India may not rival China as a great power, but even India should be able to contain China’s ability to project power as far away as the Indian Ocean -- and India has every reason to do so.

It’s true that there are many flashpoints for minor conflict: the Senkaku Islands, various shoals and reefs in the South China Sea, China’s expanded air defence identification zone, and most notoriously China’s building of a whole new island in the middle of the ocean, presumably intended to form the basis for reinforcing its maritime claims.

The outcome of these disputes may determine who gets to drill for deep offshore oil decades in the future. But they don’t involve major national interests for any of the countries concerned, least of all the United States.

So while it’s possible that China will become involved in a minor air or sea incident with one or more of its maritime neighbors, it’s entirely unlikely that China will become involved in a major regional conflict with any of them. No one is going to go to war because two warplanes collide in mid-air. Historically countries have not even gone to war over the intentional shooting down of civilian airliners, never mind military accidents.

One China war scenario is credible, but it doesn’t threaten U.S. interests: the possibility of war between China and Russia.

Contemporary Russia is a deceptively unstable country that could suddenly descend into anarchy at any moment -- in an unsuccessful military coup, on the unexpected death of Vladimir Putin, in a future “color” revolution, etc. As Russian academic Artyom Lukin explains, the Russian far east has massive natural resources needed by China and a population of just 6 million. In a chaotic situation it could be a tempting target, but China’s current leadership seems rational enough not to run the risk of thermonuclear war.

So why play up the challenge from China?

Let China modernize its military. China’s neighbors will bulk up in response to any perceived threat, many of them by purchasing expensive U.S. weapons. China’s leadership (much closer to the action than America’s leadership) presumably understands this. If China’s military budget is growing, it is likely because China is growing, not because China has any specific invasion plans.

There are as yet no signs that China’s military expansion threatens the United States. Quite the contrary: It might support greater Chinese involvement in international peace-keeping, and it could spark more appropriate burden-sharing among America’s Asian allies.

When the China challenge is broken down into its constituent parts, the China threat tends to evaporate. Far from identifying any real rationale for action, Carafano’s article seems designed to drum up interest in the Heritage Foundation’s 2015 defense review, which makes a 313-page case for higher military spending.

Carafano himself freely admits that “there is no evidence that Beijing has any interest in engaging in armed conflict with Washington.” If that’s the case, why arm to forestall that threat? Peaceful coexistence is a much cheaper and much less provocative strategy.

Salvatore Babones is an American comparative sociologist at the University of Sydney in Sydney, Australia. His academic research focuses on economic development in middle-income countries. He is currently a visiting scholar at Academia Sinica in Taipei, Taiwan.