Fragile in Every Sense of the Word: Nepal's Political Crisis 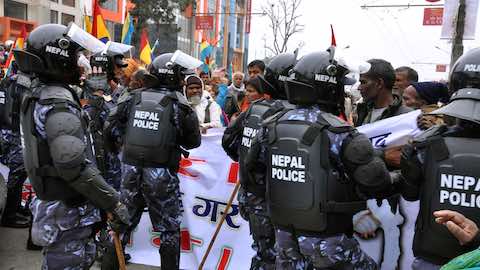 Nepal's rebuilding efforts will end once it recovers from its recent earthquakes, right? Wrong, says Olivier Guillard. Local politicians and ethnic minority activists will remain at loggerheads over the future political shape and trajectory of this impoverished country.

Next year marks the 10th anniversary of the end of Nepal’s civil war, a conflict that resulted in the deaths of approximately 18,000 Nepalese and the displacement of around 100,000 more. A decade of violence and political turmoil was ended with the signing of the Comprehensive Peace Accord by the government and Maoist rebels. It was also accompanied by an agreement to draft a new political constitution for the former mountain kingdom. However, vested political interests and bad governance have once again brought a negotiation process that formally began in 2008 to a grinding halt. As a result, concerns are growing that Nepal might soon be in for another round of political upheaval – at a time when it needs it the least.

The events of 22nd January amply demonstrate the potential for crisis inside this poor, fragile and now devastated state. The most recent attempt to reach a consensus on a new constitution was marred by violence between members of Nepal’s Constituent Assembly. It was the fourth time since 2010 that lawmakers have attempted to finalize the new constitution’s text. The reasons for this breakdown are all too familiar: political and ethno-religious interests continue to trump pragmatism and political expediency. The complacency and self-interest of many Nepalese lawmakers should also be taken into account. Indeed, the last significant piece of progress dates back to 2007, when a simple interim draft to govern national affairs was agreed upon.

Accordingly, the disturbance also reflects that the ‘sticking points’ between Nepal’s rival political factions have changed very little over the past few years. For instance, debates continue to rage over whether Nepal should be a secular or Hindu state as well as the final shape of country’s electoral system. Of equal (if not greater) importance is the final composition of the federal democratic republic that replaced two centuries of monarchical rule. Debates here continue to reflect the gulf between the coalition government of Prime Minister Sushil Koirala and the Maoist/Madhesi opposition. While the Nepali Congress-CPN-UML coalition is pushing for a smaller federation of six to eight states, opposition politicians continue to demand almost double this number.

The Maoist and Madhesi opposition’s support is based around their heartlands in the south of the country. Both groups want a federal system that better reflects Nepal’s diverse and complex ethnic mix. For its part, the Koirala government remains opposed to these demands, arguing that this approach would aggravate ethnic tensions and undermine a much-needed national unity. As a result, the coalition is determined to push through proposals for a federal system based on geographical rather than ethno-religious logic. The opposition, understandably, views this proposal as a recipe for further disaster.

Towards a Jana Andolan III?

Nowhere are these differences of opinion more keenly felt than on the Terai plains. Located along the border with India, the region accounts for 1/5 of Nepal’s landmass and is home to approximately 50% of its population. The Terai is also the home of the Madhesi community, an ethnic group that’s culturally and linguistically distinct from Nepal’s northern tribes. For this reason, Madhesi activists continue to lobby for a different administrative status from the rest of the country, a demand that’s bitterly opposed by the Koirala administration. So far, protestors have preferred to take non-violent forms of action against the government. However, patience is beginning to wear thin among some activists.

That said, activists from all of Nepal’s ethnic groups continue to feed off the uncertainty caused by Kathmandu’s failure to draft a workable constitution and improve the country’s parlous economic conditions. It’s estimated that a quarter of the Nepalese population lives below the poverty line on an annual income of less than 600 Euros. Moreover, a quarter of the country’s gross domestic product (GDP) can be attributed to the vast Nepalese diaspora. In response, Nepal has been plagued by general strikes and sporadic outbursts of pro- and anti-government protests since at least 2006. To further complicate matters, there have been no less than seven changes of government over the past seven years. This is just as much a reflection of the negligence and ineptitude of Nepal’s political elite as it is the general unease among the wider population.

As things stand, Nepal is currently ranked 126th out of 174 countries by Transparency International’s Corruption Perceptions Index. Many Nepalese also view the country’s political parties and legislature as hotbeds of cronyism and nepotism. It’s much the same with public appointments, with the opening line of the Nepal section of the Global Corruption Report stating:

‘’With the exception of recruitments dealt with directly by the Nepal Public Service Commission, nepotism in appointments is systematic in Nepal. Government schools are no exception’’.

Such perceptions have undoubtedly created a sense of disillusionment among Nepal's electorate. This is further compounded by research suggesting that the country’s military, media outlets, religious bodies and business community are also viewed with a fair degree of cynicism. As a result, many Nepalese do not expect the current social, economic and political system to improve living standards, enhance transparency and provide opportunities for greater participation in the country’s politics.

One can only imagine how the recent earthquakes will impact upon Nepal’s already less-than-ideal social and economic conditions. For the time being, however, public dissatisfaction and political dissent is likely to give way to the need to rebuild the country’s infrastructure. This also means that a return to the more extreme political protests that blighted Nepal between 1990 and 2006 is unlikely to happen in the months ahead. Dialogue on a new constitution will be placed on the backburner, and troops will be (re)mobilized to aid recovery efforts rather than breaking up political protests. It also remains to be seen whether the recovery from this latest natural disaster will instill a new sense of identity among Nepal’s disparate ethnic groups.

The earthquake crisis is also likely to have a temporary impact on the strategic calculations of Nepal’s largest neighbors, China and India. Of the two, the latter currently has a greater vested interest in the long-term fate of the country. Kathmandu’s relations with New Delhi were cemented in 1950 with the signing of the Treaty of Peace and Friendship. An estimated 600,000 Indians currently live in Nepal, thereby expanding the country’s Hindu community and making a significant contribution to the economy. India also accounts for approximately 40% of foreign direct investment (FDI) into Nepal, as well as two-thirds of its foreign trade. However, a number of high-profile energy projects – such as the Raxaul-Amlekhgunj pipeline – have stalled as a result of the country’s political instability.

By comparison, Nepal’s relations with China remain a ‘work in progress’. In December 2012, Nepal’s foreign minister Mahendra Bahadur Pandey used his trip to China to confirm the Koirala government’s admiration for Beijing’s “peripheral diplomacy” and “development cooperation relations”. He also confirmed Kathmandu’s interest in being part of China’s ambitious Silk Road initiative. While Nepal has little to offer in the way of natural resources or manufactured goods, its involvement in one of Beijing’s flagship projects will enhance connectivity between South Asia and China. It will also provide Beijing with a greater degree of influence over a state that was once thought to be exclusively in New Delhi’s strategic backyard. Indeed, China can now stake its claim with an even greater degree of confidence now that it has replaced India as the largest contributor of FDI into Nepal.

The strategic rivalry between Beijing and New Delhi is also being played out in Nepal’s post-earthquake recovery efforts. Despite geographical proximity, neither side is prepared to coordinate their emergency and rescue activities. But that’s not to say that both countries are completely locked into a game of one-upmanship over Nepal. There are many issues where Beijing and New Delhi share mutual interests and concerns, including a desire to see the establishment of a bona fide federal republic and an end to political unrest. Just don’t expect either side to work together to resolve them.

As stated earlier, efforts to rebuild the country following two earthquakes that have killed almost 10,000 Nepalese will, for the time being, take precedence over creating a political constitution. However, once rescue and reconstruction efforts have ended, the international community is likely to be confronted by an all-too-familiar Nepalese state. Elites from across the political and ethnic divides will remain locked in a battle over the future shape and trajectory of the country - much to the chagrin of ‘ordinary’ Nepalese citizens. Further social unrest inside this isolated and landlocked Asian country cannot (and should not) be ruled out.

Olivier Guillard is currently Research Director ASIA for the  Institut de Relations Internationales et Stratégiques (IRIS). He holds a PhD in International Public Law from the University of Paris.

Fragile in Every Sense of the Word: Nepal's Political Crisis