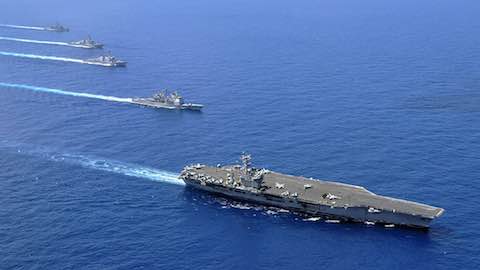 Neil Thompson believes that China would never willingly undercut regional economic integration in order to protect its territorial interests in the South China Sea. What's changed, however, is that Beijing now believes it can fulfill these interests without resorting to war.

There was a time when China sought to resolve its maritime border disputes with its ASEAN neighbors amicably and with a minimum of fuss. Positive dialogue helped to ensure that Beijing eventually sat at the center of an intricate web of resource extraction, manufacturing and assemblage. Yet, in more recent years, China has grown increasingly assertive within the resource-rich and strategically important South China Sea. Last summer, for example, Beijing moved an oil rig into contested waters, a move which sparked violent anti-Chinese protests in Vietnam. In addition, China’s land-reclamation activities are now matched by Hanoi’s own island building program, while the Philippines has opted to increase its naval presence in its disputed waters.

Much like Russia’s actions in Ukraine, China’s seemingly bellicose behaviour demonstrates that powerful states can still burst through the restraints of international law and diplomacy if determined to do so. Yet, it must also be remembered that the country’s last full-blown military campaign occurred in 1979 (although it has deployed troops to South Sudan to protect oil facilities). Since then, successive Chinese leaders have acknowledged that the international environment no longer rewards force to the same extent as in the past. Indeed, doing so has undoubtedly made a significant contribution to the country’s rapid economic development. Consequently, Beijing would never willingly undercut the advantages that regional economic integration has brought - unless it felt that core Chinese interests were at stake. What’s changed, however, is that China believes it can now enforce its territorial claims without overstretching itself elsewhere.

Nationalism retains a strong legitimacy in East Asia, and China is no exception. Beijing has never compromised on its core demand for the return of those parts of Qing China that currently lie outside the country’s modern borders. On the contrary, it has shown that it is willing to bear significant social, economic and political costs to retain possession of Tibet and pursue union with Taiwan. The South China Sea therefore remains another obvious regional flashpoint for tensions with China’s neighbours. Chinese students have been studying the country’s ‘rights’ to the entire region under the so-called 'nine dash line' since the 1940s, making it a general article of nationalist faith in the process.

In 2012, the Communist Party reclassified the South China Sea as a “core national interest” alongside Tibet and Taiwan, meaning that Beijing views the region as sovereign Chinese territory. Yet, while Beijing renounced the use of force to settle disputes with the signing of the Treaty of Amity and Cooperation in Southeast Asia, the region’s maritime border issues never really went away. Much like the misnamed ‘frozen conflicts’ of the former Soviet Union, friction between Southeast Asia’s maritime states continues to flare up from time to time. For their part, a string of smaller Asian powers continue to dispute China’s claims despite increased levels of trade between Beijing and ASEAN.

Indeed, regional observers also note that China and ASEAN member-states have pursued a cumulative strategy of minor actions which fall just below the level of overtly hostile and provocative acts for quite some time. One generalised example might be Indonesia’s incumbent administration, which has implemented (and acted upon) a policy of sinking illegal fishing vessels it captures in its territorial waters. At Jakarta’s behest, Indonesia’s armed forces have so far sunk ships from Vietnam, the Philippines, Malaysia and Thailand, and ominously suggested extending the policy to Chinese vessels.

Of course, knowing exactly where Indonesia’s exclusive maritime economic zone ends and China’s claims begin remains unclear. Beijing has not clarified the matter to Jakarta, while Indonesia resents what it sees as Chinese encroachment on its segment of the Straits of Malacca. Either government could decide to make an example of fishing boats found in ‘their’ waters. Such rows over law enforcement involving fishing vessels in other disputed waters have also been a recurrent source of international incidents between Beijing and Tokyo in recent years.

Knowing that they have no chance of effectively competing with the People’s Liberation Army Navy (PLAN), smaller states like the Philippines have also lodged claims against China at the United Nations, based on the UN Convention on the Law of the Sea (UNCLOS). This treaty typically gives coastal states an Exclusive Economic Zone (EEZ) up to 200 nautical miles from their coastline. Since both China and its rivals have ratified UNCLOS, Beijing has created man-made versions of the natural features countries like the Philippines or Vietnam use to bolster their claimed EEZs. This response, with its programme of island-building in various parts of the Sea to artificially mirror the islets and reefs claimed by its opponents, has antagonised the United States. As the world’s leading naval and trading power, Washington is not about to countenance any efforts to convert the international waters of the South China Sea into a Chinese maritime province.

State-building in East Asia has fuelled a regional culture that places a strong emphasis on sovereignty which has occasionally led to outbreaks of competitive behaviour. Like the smaller ASEAN states, Beijing has strenuously avoided negotiating in good faith to maximise its share of a joint oceanic 'pie'. Instead, it has used its permanent seat on the UN Security Council and growing influence within Asian regional organisations to put pressure on its ASEAN neighbors. In doing so, Beijing is playing the long game safe in the knowledge that if it gives way on its more outlandish demands, it will still get most of what it wanted all along.

Yet, that’s not to say that there isn’t a real threat of war involved. Countries have often gone to war over strange scraps of territory when they felt their larger economic or national interests were compromised. Indeed, the threat of events escalating uncontrollably always exists in territorial disputes. The difference, however, between China and a state like Indonesia or the Philippines is that the former’s provocative behaviour is also a challenge to the global hegemon, and therefore carries implications far beyond the South China Sea.

By standing by its maximalist territorial claims in the South China Sea, Beijing is also using the issue as a wedge to highlight Washington’s pursuit of bilateral relations with individual ASEAN members over collective defense. US treaties with Asian allies are considerably less firm than those it has with European states through NATO. Accordingly, Beijing is prepared to gamble that Washington will ultimately accommodate China’s aspirations in the South China Sea rather than back a small ally against a nuclear-armed competitor over a relatively minor territorial dispute. It also believes that the conflicting interests of the different ASEAN members and their increasing economic reliance on Beijing will prevent them from responding in a unified fashion to reject China’s claims in the future.

In effect, Beijing is trying to encourage a Grotian moment that acknowledges the greater weight China’s view of regional security must be given in light of its increased economic and military importance. Should this occur, then a new precedent will be set in which Beijing can rely upon in maritime disputes elsewhere to advance its strategic interests. US naval power has now dominated Southeast Asia for seventy years and the US navy has navigated the South China Sea virtually unchallenged since the end of the Cold War. While neither China nor the US really want to become embroiled in a devastating Sino-American conflict, the latter’s uncontested naval dominance is gradually being eroded.

A New Precedent or Reaffirming the Status Quo?

While another geopolitical confrontation is unwanted, given Washington’s on-going travails in the Middle East and with Russia, China’s rise is only just beginning. The South China Sea will continue to be an object of strategic desire in Beijing and the response of ASEAN member states will be crucial in deciding who will acquire and maintain the local political support needed to project its hegemony over the region. As things stand, the United States can count on the regional popular hostility to China deepening if Beijing continues to court controversy with its actions in the South China Sea. But it might be better for all involved if the region’s stakeholders learned to follow the spirit as well as the letter of international law in settling their disputes.

Neil Thompson is Content Editor at News4Media and freelance contributor at the Diplomat, Informed Comment, Geopolitical Monitor and similar publications. He holds an MA in International Relations of East Asia from the University of Durham.