The Failure of Foreign Aid to Pakistan 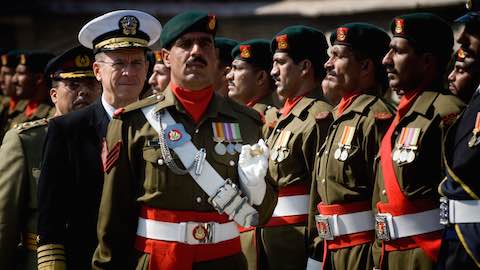 The Failure of Foreign Aid to Pakistan

Sunil Dasgupta believes that external foreign aid hasn't helped curtail extremist violence in Pakistan. That's because the aid has focused too much on minimizing the Pakistani state's weaknesses and ignored the real problem -- too many people in the country believe that violent extremism is politically legitimate.

According to a recent Financial Times report, Pakistan is in the process of buying eight Chinese submarines worth $4-5 billion. To paraphrase the American national security writer William Arkin, this means that U.S. aid to Pakistan now goes toward buying Chinese weapons for a war against India that everyone is hoping will not happen, and if it does, will not be fought at sea.

Through billions of dollars in foreign aid, the United States has tried to convince the Pakistani state, its leaders, and perhaps even the country’s elite to turn the tide against Islamist extremism in the country. Do not expect an obituary, but this foreign aid policy should now be recognized as a complete failure. By focusing on strengthening the extant Pakistani state and military, these policies have ignored and even aggravated the social sources of the country’s problems.

The basic facts of the case about Pakistan are well known. For years, the country has been at the center of a number of international security concerns. First, Pakistan has become the source of Islamist extremism and violence. It is now home to a number of terrorist groups, which erupt into violence regularly at home, in the region, and sometimes across the world. The state of Pakistan possesses nuclear weapons, which it uses to keep its simmering rivalry with India from boiling over, but the nukes also cause fears of what might happen if they fall into the hands of a terrorist group. The military plays a larger role in Pakistan than warranted in a democratically elected government.

Those invested in transforming Pakistan—the United States and the Western world in general, overseas and liberal Pakistanis—have concluded from these facts that the solution in Pakistan lies in strengthening the state so that it can make difficult choices and undertake necessary reforms. In support of that goal, the United States has provided Pakistan with billions of dollars in foreign aid. Far from reversing the problem, Pakistani state policy has exacerbated Islamist extremism in the country. Arguably, external assistance itself has undermined the possibility of change, tainting the Pakistani state as a foreign agent. Notwithstanding repeated failures, however, the United States has persisted in its aid policy.

Furthermore, this is not a problem of U.S. policy alone. The British approach toward Pakistan is similarly misguided, and European thinking is even less cogent. India, whose future is most closely linked with Pakistan’s, has hardly done any better, and Pakistan’s closest allies have failed as well. Saudi Arabia, for instance, has not managed to convince Pakistan to act against extremist groups with anywhere near the vigor with which it has done at home. China has acted opportunistically to consolidate its relations with Pakistan on a number of fronts, but, on the issue of Islamist extremism, Beijing has not had noticeable influence even as the problem has grown inside China.

The breadth and persistence of the failure of international policy toward Pakistan is mindboggling. How can so many countries be so wrong, for so long, on so vital an issue? In recent years, authors such as T.V. Paul, Christine Fair, and Hassan Abbas have blamed Pakistan’s situation on the misplaced priorities of its government, the insecurities of the Pakistan Army, and the arrogance of the United States. But this essentially state-centered diagnosis of Pakistan’s troubles is too narrow. If anything, the origins, dimensions, and consequences of religious extremism and violence are rooted in society. Indeed, placing the state at the center of Pakistan’s political development is historically far-fetched. In matters from democracy to extremist violence, the state has followed social preferences rather than shaping them.

For example, the conventional wisdom holds that Zia-ul-Haq, the military dictator of the country in the 1980s, seeded the radical Islamist movement in the country both to consolidate his own position and to generate religious fervor in the military campaign in Afghanistan. However, strong elements of radical Islamist beliefs in Pakistani society pre-existed Zia, and his political rival Zulfikar Ali Bhutto (who Zia tried and executed) sought to capture its emotive appeal for his own gains.

The legitimacy of religious extremism

The Pakistani state has contributed to the problem, but today, the challenge is not only beyond the state, it is beyond the state’s ability to fix. No amount of foreign aid, as the submarine deal shows, can fix the problem. The Pakistani government simply cannot fight the social acceptance of terrorist groups. With public support tilting away from the government, the actions of a democratic state—driven to be responsive to the population—can hardly to be expected to bring about the necessary transformation. Even Pakistan’s military regimes, which have also ruled with a keen eye toward public attitudes, have not shown the ability to engender a national makeover.

The terrorist group, Lashkar-e-taiba, is banned in Pakistan, but it can send a rally through its crowded cities without anyone being surprised let alone upset. The United Nations and major countries classify Lashkar as a terrorist organization. After it was banned inside Pakistan, Lashkar changed its name to Jamaat-ud-Dawa. Jaamat-ud-Dawa’s leaders further proclaimed a break with the Lashkar-e-taiba. But most Pakistanis do not make the distinction between the Lashkar-e-taiba and the Jamaat-ud-Dawa. In 2008, the group organized deadly commando attacks in Mumbai, killing 166, and India has demanded that the Pakistani government arrest the leaders of the group. Instead, this year, a Pakistani court allowed one of the key accused to be freed for lack of evidence.

The extremist groups may have been perceived to be serving a greater purpose against India, in Afghanistan, and against the United States. Today, however, Pakistan itself has become the bigger target of religious extremist violence linked to Lashkar-e-taiba. Although attacks such as on the Peshawar school in 2014 have outraged Pakistanis, the disgust has not led to the complete rejection of the groups.

Religious extremist groups have killed many Pakistanis who have spoken out against their thinking, among them, Salman Taseer, the former governor of the Punjab province. Malala Yousafzai cannot return to Pakistan because of threats to her life. Meanwhile, mobs have chased and killed non-Muslims they accuse of blasphemy. The violence against Shias has been significant. Walking around Pakistani cities, however, does not leave the impression of a society threatened into submission. Most Pakistanis remain proudly nationalist. The streets are vibrant with people and commerce. The traffic is only getting worse. The Pakistani media is alive and well. Even Pakistani political institutions, such as the National Assembly, churn out new and important laws. The only thing missing is a thorough rejection of extremism and violence.

The conclusion to draw from this is that Pakistanis generally accept that groups rooted in extremist religious thinking can and should occupy legitimate public space in the country. If there is a private rejection of the extremist groups, the general acceptance of extremist groups preserves a powerful and damaging public lie. Since Pakistan has never been quieted in the same way as Soviet-era Eastern Europe, the public space occupied by extremist groups captures the private and the public truth: a religious-political group such as the Lashkar that is complicit in acts of terrorism can be a normalized social association.

This legitimacy of religiously driven extremist groups and, consequently, the violence they bring to politics appears to be sufficiently wide and deep that those who seek to fight them are repeatedly thwarted, and external support is immediately suspect for undermining Pakistan’s true national interest. Even the Pakistan Army, the most powerful institution in the country and often a sponsor of extremism itself, has been accused of fighting “America’s War” when fighting against the Taliban, with which Lashkar-e-taiba has been linked.

To be fair, all countries carry their own millstones. Race has been the never-ending lightning rod in the United States. Caste has been the persistent drag on India. These issues have endured numerous environmental and institutional changes. Changing attitudes toward religious extremism in Pakistan’s population has similarly meager prospects.

Given the true nature of the problem, the reason for the persistence of the foreign aid diplomacy speaks to a larger failure of the imagination. The discipline of political science, following a lineage going back to Weber, Marx, and Hobbes, sees leadership as essential to the prospect of change, and control over the state as a powerful tool to further or deter change. Foreign aid, diplomatic demarches, economic sanctions, and even threats of war are predicated on the idea that the state in the target country will see new reason and provide the leadership to change course, but what happens when the state is not in a position to do this?

As currently constituted, the state in Pakistan simply cannot deliver, but there is no commitment and viable pathway to reconstituting the state. Instead, there is fear that reconstituting the state at this time will strengthen Islamist groups and open the possibility of nuclear weapons falling into terrorist hands. Foreign aid diplomacy, then, becomes something to do in the belief that doing nothing may be worse; and the reason a failed policy does not see the end that it deserves.

It is now time for outsiders to stop making demands on Pakistan even when they come on the back of large checks. As it is, these checks do little more than color the receiver as a foreign agent.

Sunil Dasgupta is the director of University of Maryland Baltimore County's Political Science Program at the Universities at Shady Grove. His research and teaching focuses on security and foreign policy. He is currently working on research examining changing military organization and Indian and Chinese pursuit of great power status.

The Failure of Foreign Aid to Pakistan - Current Events in Pakistan